After Japan introduced a negative policy interest rate in 2016, market expectations for inflation over the medium term fell immediately. This can be seen by assessing how prices for Japanese bonds with embedded deflation protection responded to the policy announcement. The reaction stresses the uncertainty surrounding the effectiveness of negative policy rates as expansionary tools when inflation expectations are anchored at low levels. Japan’s experience also illustrates the desirability of taking preemptive steps to avoid the zero interest rate bound.

In many of the world’s advanced economies, central banks have set policy rates close to or below zero. Indeed, negative rates have been relatively common for some time in many countries. Denmark’s policy rates fell below zero in July 2012, rapidly followed by a number of other central banks, including the European Central Bank, the Swedish Riksbank, and the Swiss National Bank (see Lopez, Rose, and Spiegel 2018). Japan also has extended experience with ultralow rates after setting its leading policy rate below zero on January 29, 2016. Japan’s experiences are now long enough to provide evidence on the efficacy of going negative as a tool for expansionary monetary policy.

Japan has struggled with very low inflation since the mid-1990s. Its policy rate and related short-term interest rates have been close to zero for much of that time. Japan has also had an extensive experience with unconventional monetary policy, with limited apparent success (see Spiegel 2001).

Figure 1 shows the monthly year-over-year changes since 1980 in the Japanese consumer price index (CPI) excluding fresh food. This is the price index targeted by the BOJ. Inflation in Japan since that time has been persistently low, with extended spells of deflation interrupted by brief short-lived upticks in inflation. 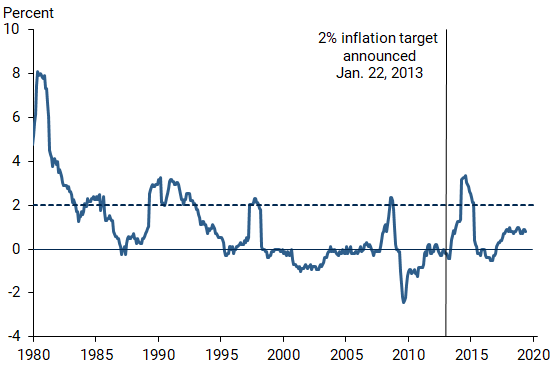 Furthermore, returns to investors, or yields, on both medium- and long-term bonds have continued to fall in Japan since the end of the global financial crisis in 2010. The extended period of weak conditions in Japanese financial markets provides an example of an environment where expectations of inflation are likely to be anchored at low levels, which is confirmed by survey data from Japan over this period.

Under Prime Minister Shinzo Abe’s reform program, commonly referred to as Abenomics, the Bank of Japan introduced a number of expansionary policies to raise inflation and inflation expectations. During his campaign, Abe promised a series of reforms that rested on three “arrows”: substantial easing of monetary policy, short-term expansionary fiscal policy, and structural reforms. Monetary policy easing included an increase in the inflation target to 2%, an expansion of the large-scale asset purchase program, and stronger forward guidance. However, after failing to achieve a sustained increase in inflation expectations with policy rates already at zero, the BOJ moved to negative rates in January 2016.

We assess the impact of monetary policy changes using the information contained in nominal and inflation-adjusted, or real, Japanese government bond yields. This market is the second-largest bond market in the world—surpassed only by the U.S. Treasury market in terms of size and liquidity. It therefore can be used to accurately gauge market expectations from financial data.

Analysis of nominal and real yields

Following Christensen and Spiegel (2019), we examine yields for the 23 inflation-indexed bonds issued by the Japanese government from January 2005 to the end of May 2019. We also include a sample of Japanese nominal zero-coupon bond yields from 1995 through the end of May 2019. Our sample contains bond yields for six maturities, four of which are shown in Figure 2, where the zero-bound constraint on short- and medium-term yields is clearly visible. 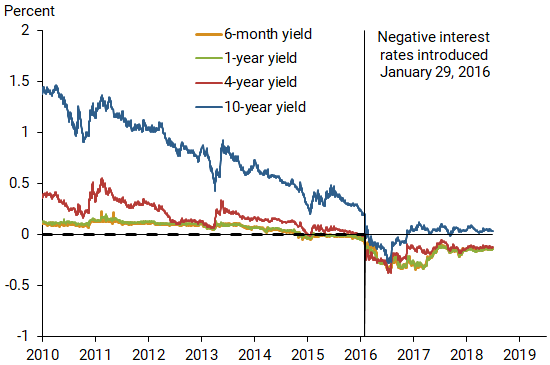 Japanese inflation-indexed bonds have always protected against inflation by adjusting coupon and principal payments to compensate holders for increases in the Japanese CPI from issuance to maturity. However, the inflation-indexed bonds issued since the 2% inflation target was announced in 2013 also provide “deflation protection,” in that they pay off their nominal principal at maturity even if there is price deflation. Due to Japan’s very low inflation and occasional deflation over the past 20 years, this protection has turned out to be valuable—well over half a percentage point (50 basis points) for extended periods—as well as volatile.

The difference between nominal and real yields of the same maturity, commonly known as the breakeven inflation (BEI) rate, is widely used to assess inflation expectations. However, there are two distinctions between the BEI rate implied by Japan’s inflation-indexed bonds and expected inflation. First, BEI rates contain an inflation risk premium, which is the additional positive or negative return required by investors to compensate for exposure to risk associated with future inflation. Second, the value of the deflation protection for Japanese inflation-indexed bonds issued since 2013 has not been accounted for. This enhancement raises the value of inflation-indexed bonds, and hence pushes down real yields. This creates an upward bias in the measurement of inflation expectations from BEI rates.

We therefore adjust our estimate of the BEI rate for both inflation risk premiums and our estimate of the value of the deflation protection. We also incorporate semiannual 10-year forecasts of CPI inflation from the Consensus Forecasts and the Survey of Professional Forecasters in the model estimation, as advocated by Kim and Orphanides (2012). 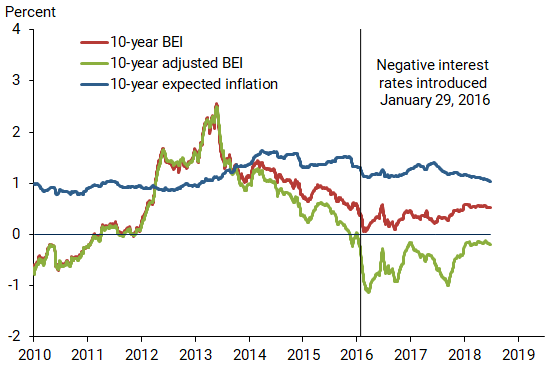 Some patterns in the data are worth noting. First, the deflation protection adjustment in the BEI rate is large, typically between ½ and 1 percentage point, and quite volatile. The size and volatility of this gap underscores the importance of properly adjusting for the deflation enhancement when assessing Japanese market inflation expectations. Second, the estimate of 10-year expected inflation has been positive throughout but not very volatile. It drifted up modestly in 2013, as enthusiasm over the proposed Abenomics reform program spread. However, it drifted down again as pessimism over implementing the program began to emerge in 2014. Notably, inflation expectations immediately declined after the BOJ policy rate became negative, and dropped even lower at the end of our sample.

Because market expectations are likely to react quickly to announcements of BOJ policy changes, we also study the immediate response to the BOJ announcement of negative policy rates on January 29, 2016. This announcement was largely unanticipated by financial market participants; the 10-year nominal yield dropped more than 9 basis points (0.09 percentage point) that day. The market’s reaction to the announcement therefore is likely to be informative about the policy’s effect on market participants’ inflation expectations. For a better understanding, we analyze this reaction during a one-day event window around the announcement and focus on movements in the 10-year maturity.

Additional details available in Christensen and Spiegel (2019) confirm these findings. When we do not include the deflation protection adjustment, we find that the 10-year BEI rate rose 1 basis point, driven by an increase in the 10-year inflation risk premium of 2 basis points, which is slightly offset by a modest decline in 10-year expected inflation.

However, once we include the adjustment for deflation protection in the indexed bonds, the move to negative rates appears to have had a much different impact. After adjustment, the change in the 10-year BEI rate following the BOJ policy change declined an estimated 8 basis points, split almost equally between a 3 basis point decline in 10-year expected inflation and a 5 basis point drop in the 10-year inflation risk premium.

Figure 3 also shows that the discrepancy between adjusted and unadjusted BEI increased dramatically on the announcement date, reflecting the increased value market participants placed on the deflation protection enhancement. Essentially, the market appeared to treat negative rates as bad news, perhaps because investors were concerned that the BOJ’s unprecedented move meant that economic conditions were worse than they thought. Indeed, both the 10-year expected inflation rate implied by our model in Figure 3 and corresponding surveys of expected inflation have trended lower since early 2016.

A similar impact of surprise monetary policy shocks in the United States has been reported by Christensen and Rudebusch (2012), who scrutinized the one-day response of U.S. Treasury yields to the Fed’s March 2009 announcement of “extended period” language and additional asset purchases. They found that these actions significantly lowered investors’ expectations for future monetary policy.

Because of the long period of low inflation in Japan, its experience provides an interesting example of the impact of negative monetary policy rates when inflation expectations are well-anchored at very low levels. We examine movements in yields on inflation-indexed and deflation-protected Japanese government bonds to gauge changes in the market’s inflation expectations from the BOJ moving to negative policy rates. Our results suggest that this movement resulted in decreased, rather than increased, immediate and medium-term expected inflation. This therefore suggests using caution when considering the efficacy of negative rates as expansionary policy tools under well-anchored inflation expectations.

An important caveat to our results is that the BOJ move toward negative rates may itself have reflected deteriorating economic conditions. Therefore the changes in the market’s expectations could have been responses to that deterioration rather than to the policy change. In other words, it is possible that the decline in medium- and long-term inflation expectations in the data might have been even steeper if the BOJ had not moved into negative policy rates.