How Much Could Negative Rates Have Helped the Recovery?

The Federal Reserve dropped the federal funds rate to near zero during the Great Recession to bolster the U.S. economy. Allowing the federal funds rate to drop below zero may have reduced the depth of the recession and enabled the economy to return more quickly to its full potential. It also may have allowed inflation to rise faster toward the Fed’s 2% target. In other words, negative interest rates may be a useful tool to promote the Fed’s dual mandate.

The Federal Reserve responded aggressively to the most recent financial crisis and the Great Recession of 2007-2009 by cutting the target for its benchmark short-term interest rate, known as the federal funds rate, to a range just above zero in December 2008, where it stayed until the end of 2015.

Traditionally, it has been assumed that nominal interest rates cannot fall below zero, known as the “lower bound.” Ever since 2008, researchers have debated how much monetary policy was constrained by this lower bound and how much it affected economic outcomes. To work around this constraint, the Federal Reserve turned to unconventional monetary policy tools such as forward guidance and large-scale asset purchases. Other central banks—in Switzerland, Sweden, Japan, and the euro area—took unconventional policy one step further and challenged the traditional view on the lower bound by setting their target rates below zero.

In this Economic Letter, I consider whether pushing rates below zero would have improved economic outcomes in the United States in the aftermath of the financial crisis. Model estimates suggest that reducing the effective lower bound for the federal funds rate to –0.75% would have reduced economic slack by as much as one-half at the trough of the recession and sped up the ensuing recovery. While the boost to the economy would have been negligible after 2014, inflation would have been higher throughout the recovery by about half a percentage point on average.

The case for negative interest rates

Standard monetary theory states that the short-term nominal interest rate should be lowered to stimulate the economy whenever there is low inflation or economic slack—that is, when economic resources are not being fully used to their most efficient level. However, the nominal interest rate has a lower limit beyond which it becomes ineffective as a policy tool; traditionally, that lower bound has been considered to be around zero.

A negative interest rate implies that savers pay rather than receive accumulated interest. This seems counterintuitive because savers can always take money out of that account and keep it in the form of cash. Therefore, there is no reason to accept a negative rate, so zero ought to be the lowest level the interest rate could fall to.

In practice, whether investors should always reject a negative rate is less clear-cut. People who hold large amounts of cash face the risk of losing it or being robbed. Banks and the broader financial system provide various tools that require investors to have funds in some form of account. This means that people might reasonably decide to tolerate a negative rate on their savings in exchange for those benefits. How far below zero the interest rate can go is not fully tested and may differ across countries. For example, Switzerland’s reference rate for the one-month LIBOR (London interbank offered rate) has been as low as –0.75%. So far, no obvious signs of serious negative effects on financial stability have surfaced in countries that used negative rates.

Estimating the stimulus from negative rates

Estimating the stimulus that negative interest rates could provide is a tentative exercise because there is limited practical experience with such a policy. Very few countries have used negative rates and then only for short periods, so it is difficult to establish a reliable statistical pattern regarding its effects.

Instead, I create a model of the economy to compare the effects of alternative policies based on the economic relations in the data. In particular, I use the empirical model described in Cúrdia et al. (2015) to estimate the underlying conditions in the U.S. economy since the financial crisis and then simulate a scenario in which the federal funds rate could fall below zero.

In this model, economic slack is measured as the output gap, the difference between the actual level of economic output and the level that would prevail if all prices adjusted freely in response to shocks in the economy to allow resources to be fully and efficiently utilized. In the model, the output gap falls with the interest rate. Slack also depends on several other factors, such as government spending, financial conditions, and labor productivity. In this model, inflationary pressures fall with economic slack but rise with expected future inflation and other factors related to production costs. The model does not explicitly account for large-scale asset purchases. However, expectations about the future path of the fed funds rate matter, including any Federal Reserve announcements about its path—known as forward guidance—as well as expectations about being at the zero lower bound.

This framework allows me to quantify the expected shifts in U.S. economic conditions after the financial crisis; I can then capture the unexpected changes, or “shocks,” through the difference between the expected and actual outcomes at each point in time. I use the underlying model of the economy to simulate alternative scenario paths for inflation and the output gap; these focus on situations when the federal funds rate response to economic conditions is governed by historical patterns but can fall negative, down to the effective lower bound. By comparing the evolution of those variables in the data and in the simulated scenarios, I can measure how much stimulus a negative interest rate could have given the U.S. economy during the recovery.

The estimation and simulations are based on data from 1987 through the first quarter of 2018 for core personal consumption expenditures price inflation, real GDP growth, and the effective federal funds rate. I also include federal funds rate expectations implied from financial market data, using the methods described in Christensen and Rudebusch (2012). This allows the simulations to take into account public perceptions about forward guidance.

Figure 1 shows the path of the federal funds rate in the data (solid blue line) and the median path of simulations for two alternative scenarios in which the effective lower bound is set at –0.25% (dashed red line), and –0.75% (dashed green line). 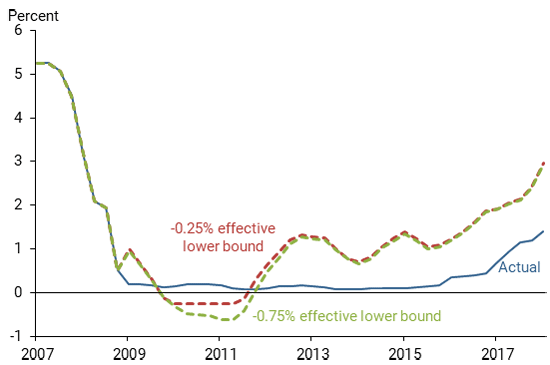 Interestingly, a negative lower bound in this model implies that the economy is constrained for much less time than it actually was in the financial crisis. Indeed, by the end of 2011 the median federal funds rate would have already risen above zero. The intuition behind this result is that allowing the interest rate to go negative stimulates the economy relative to the zero lower bound case and sets it on a faster recovery path.

How much faster could the recovery have been?

To quantify the stimulus from the negative lower bound, Figure 2 shows the median paths of four-quarter inflation (panel A) and the output gap (panel B) in the data and in the two scenarios considered in Figure 1. 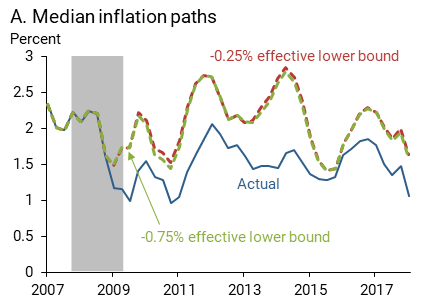 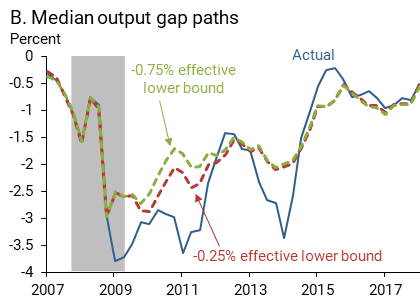 The boost from negative interest rates to economic activity would have been negligible from 2014 onward. This is because the stimulus would have pushed inflation higher as well, perhaps even modestly above the 2% Federal Open Market Committee target, by the middle of 2011. The response of inflation to the additional stimulus implies that the federal funds rate would have to rise much earlier and faster, as shown in Figure 1, thus removing accommodation in the later stage of the recovery. As discussed in Cúrdia (2016), a faster increase and overshooting the inflation target may have been optimal in exchange for less economic slack and thus might have achieved a more balanced outcome for the Fed’s dual mandate.

These estimates are subject to substantial uncertainty. Nevertheless, it is likely that a negative lower bound would have reduced the depth of the economic contraction and further reduced downside risk.

Like any statistical and economic model, these estimates are only as good as the model. This model is a simple representation and is not guaranteed to accurately mimic outcomes in the complex U.S. economy. Thus, these results should be viewed as an estimate to illustrate how much stimulus negative rates can provide, although the exact numbers are not definitive.

This Letter quantitatively evaluates the beneficial impact a negative Fed policy rate could have had during the recovery from the Great Recession. While it’s difficult to capture all the complexities of the economy in a model, this analysis suggests that negative rates could have mitigated the depth of the recession and sped up the recovery, though they would have had little effect on economic activity beyond 2014. The analysis also shows that the interest rate does not have to fall too deeply into negative territory to accomplish meaningful economic improvements.