News Sentiment in the Time of COVID-19

The COVID-19 pandemic is causing severe disruptions to daily life and economic activity. Reliable assessments of the economic fallout in this rapidly evolving situation require timely data. Existing sentiment indexes are useful indicators of current and future spending but are only available with a lag or have a short history. A new Daily News Sentiment Index provides a way to measure sentiment in real time from 1980 to today. Compared with survey-based measures of consumer sentiment, this index shows an earlier and more pronounced drop in sentiment in recent weeks.

The COVID-19 pandemic is causing severe disruptions to daily life and economic activity in the United States and around the world. These ruptures were immediately evident in financial markets, with equity prices declining sharply and market volatility spiking. It is also readily apparent that consumer spending in sectors like leisure and hospitality is falling dramatically due to shelter-in-place and other social distancing measures being imposed across the country.

Assessing the timing and magnitude of the economic fallout in this rapidly evolving situation has been hampered by the low frequency and lagged availability of most macroeconomic data. In particular, so-called hard data such as payroll employment, personal income, consumer spending, and business investment are published with lags of weeks or months. Analysts and policymakers are particularly interested in how consumer and business sentiment is holding up right now given the well-documented links between sentiment and economic activity (see, for example, Carroll, Fuhrer, and Wilcox 1994, Benhabib and Spiegel 2020, and Shapiro and Wilson 2017). Available survey-based sentiment indexes are either low frequency, which limits their usefulness in times of sudden change, or have a short history, which prevents comparisons with past episodes.

In this Letter, we discuss the newly developed Daily News Sentiment Index that provides real-time data from 1980 to today. The index was developed and analyzed in Shapiro, Sudhof, and Wilson (2020). This daily index is highly correlated historically with the monthly survey-based University of Michigan Index of Consumer Sentiment and the Conference Board’s Consumer Confidence Index.

Our Daily News Sentiment Index began falling sharply in January of this year, coinciding with increasing news coverage of the coronavirus disease 2019 (COVID-19). This change appeared two months earlier than in the survey-based sentiment measures. The decline in March was especially steep, consistent with the large drop in consumer sentiment indexes in March.

Sentiment analysis is a rapidly developing field of natural language processing and is now widely used in an array of business applications, such as social media, algorithmic trading, customer experience, and human resource management. The process allows one to directly quantify the emotional content from any set of text. There are two general approaches. The first, known as the lexical approach, relies on a predefined list of words associated with an emotion, referred to as lexicons. For example, sentiment lexicons typically classify words into three categories: negative, neutral, or positive. The second, more nascent approach relies on machine-learning (ML) techniques to predict the sentiment of a given set of text. ML techniques can, in principle, learn sentiment weights for words and even entire phrases, then use those weights to measure the sentiment of the given textual passage. The drawback of the ML approach is that it requires large training data sets labeled for the terms that are specific to the domain of interest—for example, business texts or social media posts—which are time-consuming and expensive to construct.

The study by Shapiro, Sudhof, and Wilson (2020, hereafter SSW), constructs sentiment scores for economics-related news articles using a lexical approach. It uses a historical archive of news articles from 16 major U.S. newspapers compiled by the news aggregator service LexisNexis. The newspapers cover all major regions of the country, including some with extensive national coverage such as the New York Times and the Washington Post. SSW selected articles with at least 200 words where LexisNexis identified the article’s topic as “economics” and the country subject as “United States.” Combining publicly available lexicons with a news-specific lexicon constructed by the authors, the study develops a sentiment-scoring model tailored specifically for newspaper articles.

To assess the model’s accuracy, the authors compared sentiment scores from this hybrid lexical model with human-provided sentiment scores for a random sample of 800 news articles. These latter scores were generated by a team of research assistants at the Federal Reserve Bank of San Francisco, who were asked to rate articles on a scale of 1 to 5, from very negative to very positive. The SSW hybrid lexical model was strongly correlated with the human scores, performing better than any single lexical model and similar to or better than models constructed using existing machine-learning techniques.

SSW next aggregated the individual article scores into daily and monthly time-series measures of news sentiment, relying on a statistical adjustment that accounts for changes over time in the composition of the sample across newspapers. In this Economic Letter, we extend and augment the SSW daily sentiment measure in two ways. First, we update the set of news articles from LexisNexis to the present, since the news archive used in SSW was only through mid-2015. Second, because the day-to-day fluctuations in the sentiment measure tend to be noisy, we construct a smoothed daily index as a trailing weighted average of the raw data, with weights that decline geometrically with the length of time since the article’s publication. This weighted average is analogous to how capital stocks are generally measured from past vintages of investment: older investments contribute less according to an assumed depreciation rate. We assume a depreciation rate of 5%; that is, with each passing day, articles become 5% less relevant for today’s sentiment. Our results in this Letter are not particularly sensitive to the exact depreciation rate used.

Figure 1 shows the resulting Daily News Sentiment Index over time (blue line). Updates to this index are provided regularly on the San Francisco Fed’s new data page. Figure 1 also includes the University of Michigan’s Index of Consumer Sentiment, which is derived from a survey and is available at a monthly frequency (green line). For both indexes, higher values indicate more positive sentiment. Though the units of the two indexes are not directly comparable, it is interesting to consider how each index has moved in relation to the business cycle and around the time of major events. It is also interesting how each index has moved recently, compared with responses to past events. 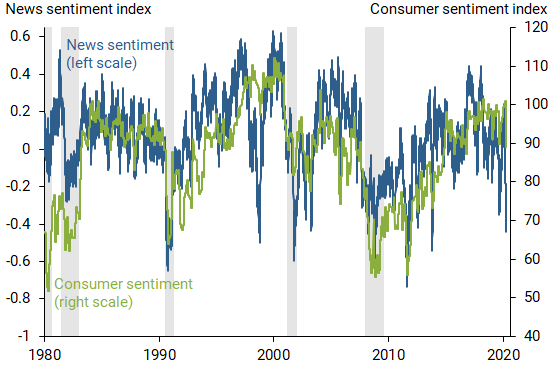 The news sentiment index correlates strongly with the survey-based consumer sentiment measure, and both are strongly procyclical, dipping during recessions and rising during economic expansions. We found similar results using the Conference Board’s Consumer Confidence Index (not shown). The news sentiment index also tends to move with key historical events that have affected economic outcomes and financial markets, such as the start of the first Gulf War in August 1990; the Russian financial crisis in August 1998; the terrorist attacks of September 11, 2001; the Lehman Brothers bankruptcy in September 2008; and the October 2013 federal government shutdown. So far in the recent daily results, the news sentiment index has not yet fallen to the low points of the past three recessions, though it may well fall further in the days and weeks ahead.

Sentiment in the time of COVID-19

Figure 2 zooms in on the last 18 months of data from Figure 1 to focus on the most recent movements in sentiment. The Michigan Consumer Sentiment Index remained elevated through February. However, March saw the fourth largest one-month decline in the index since 1980. The Daily News Sentiment Index, on the other hand, shows a sharp drop in sentiment beginning in early January and steepening further in the first two weeks of March.

Figure 2
Sentiment indexes for past 18 months 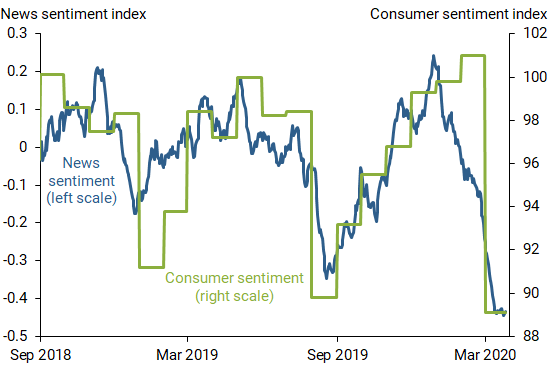 How much of the drop in news sentiment in recent weeks can be attributed to the COVID-19 outbreak? To address this question, Figure 3 shows our index (dark blue line) along with a measure of COVID-19 news coverage (light blue line). For the latter, we calculate the fraction of economics-related news articles that contain the terms “coronavirus” or “COVID-19.” The series in Figure 3 is a trailing-average of this fraction, with weights that decline geometrically for older articles, analogous to how we constructed the news sentiment index. Articles mentioning the coronavirus and COVID-19 began around January 20 and then rapidly increased. By late March, the percentage of economics-related news articles mentioning the virus reached an astounding 95%. The figure clearly shows that the decline in sentiment through mid-March coincided with the increased coverage of COVID-19. More recently, the news sentiment index has flattened, coinciding with the rise in news coverage related to fiscal stimulus legislation (green line). There was also a temporary decline in sentiment in the first half of January, which was due to the flare-up of U.S.-Iran hostilities and related disruptions in the oil market.

Figure 3
News sentiment and growth in news of COVID-19 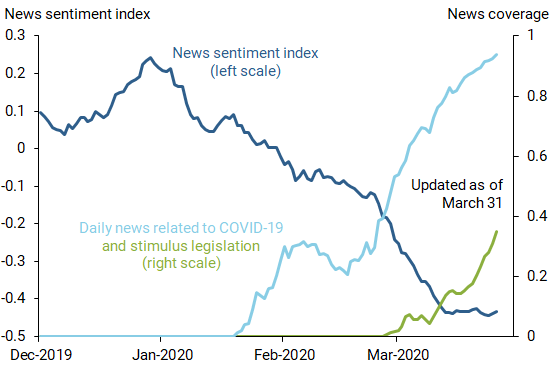 The new Daily News Sentiment Index introduced in this Letter can be especially useful in times of sudden economic change as we are experiencing now. This index is constructed at a daily frequency from 1980 to today. By contrast, existing survey-based sentiment indexes have either low frequency or a short history. The Daily News Sentiment Index is highly correlated with survey-based measures of consumer sentiment, but it shows an earlier and more pronounced drop in recent weeks. This rapid decline in news sentiment has coincided with the increasing news coverage of COVID-19.

Studies have documented a strong link between sentiment and subsequent economic activity, especially business investment and consumer spending. For example, Benhabib and Spiegel (2019), using state-level data, find that a one-standard-deviation drop in consumer sentiment as measured by the Michigan survey would be expected to result in a 2.3% drop in personal consumption expenditures. The drop over the past two months in the Michigan Consumer Sentiment Index has, in fact, been very close to one standard deviation. It is therefore worth noting, for comparison, that our Daily News Sentiment Index has fallen over the past two months by a little over three standard deviations, which may portend a steep decline in consumer spending. It is important to note that the current episode is particularly unique. Consumer spending at the moment has been depressed for reasons beyond low sentiment. In particular, government-imposed social distancing measures are directly inhibiting spending on many types of discretionary goods and services, such as those associated with leisure and hospitality.

In the weeks and months ahead, it will be important to monitor news and consumer sentiment to see how much further sentiment will fall and when it will start to turn around.

Shelby R. Buckman is research associate in the Economic Research Department of the Federal Reserve Bank of San Francisco.

Adam Hale Shapiro is research advisor in the Economic Research Department of the Federal Reserve Bank of San Francisco.