The Uncertainty Channel of the Coronavirus

The outbreak of the novel coronavirus, or COVID-19, has severely disrupted economic activity through various supply and demand channels. The pandemic can also have pervasive economic impact by raising uncertainty. In the past, sudden and outsized spikes in uncertainty have led to large and protracted increases in unemployment and declines in inflation. These effects are similar to those resulting from declines in aggregate demand. Monetary policy accommodation, such as interest rate cuts, can help cushion the economy from such uncertainty shocks.

Numerous events throughout history have triggered flare-ups of uncertainty in the U.S. economy. Over just the past two years, uncertainty spiked in response to trade tensions between the United States and China, news about Brexit, and conflicts in the Middle East. The latest burst of uncertainty has arisen from the rapid worldwide spread of the coronavirus disease 2019, or COVID-19. As of the date of this writing, the virus has infected communities in nearly 200 countries or regions, causing thousands of deaths. To contain the spread of the virus, authorities around the world have introduced drastic public health measures to reduce social interactions. Economic activity has been severely disrupted as a result, and the unemployment rate will surge in the near term. Investors have shed stocks and bought safe securities such as U.S. government bonds. As of March 20, the Standard & Poor’s (S&P) 500 stock index had lost a little over 30% of its value from its peak in late February. The 10-year U.S. Treasury yield fell to a level below 1% in the second week of March, an all-time low. Accompanying these movements, the VIX—a frequently used measure of uncertainty sometimes referred to as the “fear index”—spiked in March, surging to a level above that experienced during the 2007–2008 global financial crisis.

Predicting the economic impact of the virus is difficult, given uncertainty about the spread of the virus and the scarcity of similar events that could provide useful empirical guidance. The hit to economic activity will be deep, but its ultimate magnitude and duration are highly uncertain and will depend on the ability of public health measures to contain the spread of the pandemic.

In this Economic Letter, we focus on the economic impact of COVID-19 through its effect on uncertainty. We look at the U.S. economy’s performance following past events that triggered outsized and sudden changes in the fear index. The evidence suggests a clear pattern in which periods of heightened uncertainty are followed by persistent increases in the unemployment rate and protracted declines in inflation, despite declines in interest rates. Thus, by raising uncertainty, the coronavirus affects the economy in a way similar to a decline in aggregate demand, which the Federal Reserve normally attempts to offset by cutting the federal funds rate. We estimate that a surge in uncertainty to a level similar to the recent spikes in the VIX would have significant negative impacts on the macroeconomy. It would lead to a persistent increase in the unemployment rate of roughly 1 percentage point, while simultaneously reducing the inflation rate by as much as 2 percentage points and bringing the interest rate close to its zero lower bound. However, these estimates will surely understate the overall impact of the current pandemic in the near term because they do not account for other negative impacts through, for example, supply chain disruptions, labor shortages, and widespread shelter-in-place measures. Our analysis nonetheless suggests that, through the uncertainty channel, the pandemic is likely to weigh on the economy persistently, depressing economic activity and inflation well beyond the near term.

The virus spreads to the VIX

Uncertainty is a fact of life. Long-term economic decisions are challenging because they often have long-lasting consequences and require people to make some precommitments. Once these decisions are made, they can be costly to reverse. For example, when people buy a house, they need to make an assumption about their future employment status and whether they will have the means to make mortgage payments. Similarly, when a business contemplates investing in a new product line, the manager must make assumptions about the strength of the economy several years ahead and how much consumers will be willing to pay for that new product. When times are uncertain, households and businesses may postpone consumption and investment decisions until they have more clarity about what lies ahead.

One indicator of uncertainty is the Chicago Board Options Exchange Volatility Index, or VIX, which measures investors’ perceptions of the 30-day-ahead volatility of the S&P 500. Figure 1 shows that the VIX daily series has spiked several times since 2007. It jumped to its previous record high in November 2008, in the midst of the global financial crisis. The VIX also shot up in the fall of 2018 during a tense period of trade negotiations between the United States and China. Most recently, the COVID-19 pandemic and uncertainty about its negative impact on the world economy have ramped up the VIX to levels surpassing but comparable to those during the 2007–2008 global financial crisis.

Figure 1
The VIX daily series since 2007 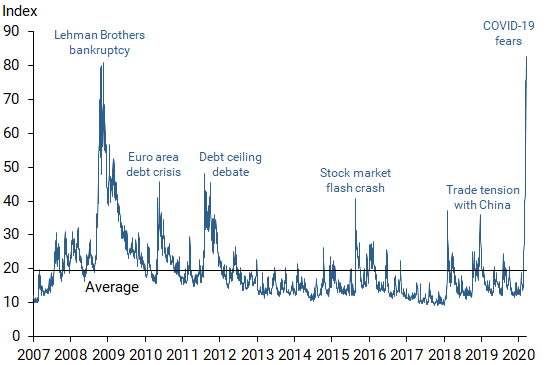 Following our earlier work (Leduc and Liu 2012, 2016), we use a statistical model to isolate the effects of these uncertainty spikes on the macroeconomy. We focus on the impact of sudden and outsized movements in the VIX. In particular, we follow Bloom (2009) and focus on changes in the VIX that are at least 1.65 times the standard deviation above the average of the index. Since they are abrupt, these events are likely to be unanticipated and can be interpreted as an exogenous “shock” to the economy. We include three macro time series in the statistical model: the unemployment rate, the inflation rate measured by the year-over-year changes in the consumer price index, and the yield rate on the three-month Treasury bill. We estimate the statistical model using these monthly U.S. series from January 1986 through January 2020, the latest data available for our model.

In theory, heightened uncertainty can raise unemployment because a job match represents a long-term employment relationship and hiring decisions are costly to reverse. When uncertainty rises, employers may choose to wait and see before filling new positions, contributing to higher unemployment. At the same time, heightened uncertainty also reduces consumer spending because households choose to increase saving for precautionary reasons, for example, in case they lose their jobs. The decline in consumer spending reduces aggregate demand, further raising unemployment in addition to pushing inflation down.

These theoretical predictions are supported by empirical evidence. Figure 2 traces out the average statistical effects of an uncertainty shock on the three macroeconomic variables in the model. Each panel shows the average as a solid line, with shading indicating a 90% certainty that the average falls within that area. Following a sudden rise in uncertainty, the unemployment rate shown in panel A rises over time, reaching a peak effect roughly one year after the impact. Similarly, panel B shows that the inflation rate falls persistently for about six months before starting to rise again. The interest rate shown in panel C falls quickly, reflecting monetary policy easing in response to the uncertainty shock. 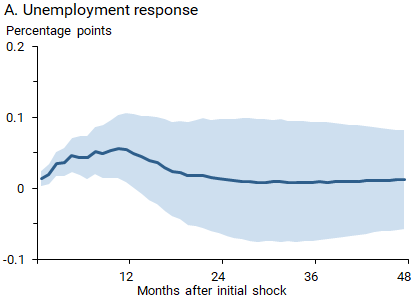 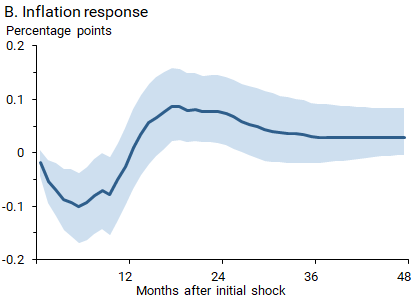 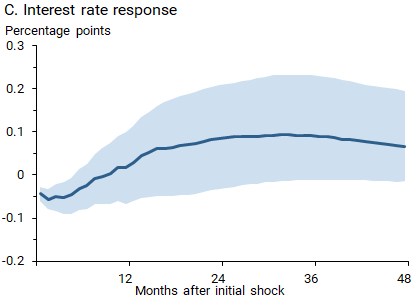 The combination of a rise in the unemployment rate—that is, a decline of economic activity—and a fall in inflation suggests that uncertainty affects the economy in a way similar to a reduction in aggregate demand (Leduc and Liu 2016). Thus, through uncertainty, the COVID-19 pandemic has important demand-side effects in addition to the supply-side effects such as supply chain disruptions and labor shortages.

In contrast, monetary policy can more easily offset the impact of a decline in aggregate demand, since cutting interest rates helps reduce unemployment and simultaneously raises inflation. Thus, demand shocks do not introduce difficult tradeoffs between the Federal Reserve’s maximum employment and price stability objectives. The decline in the interest rate following an increase in uncertainty shown in panel C reflects the fact that the Federal Reserve has historically attempted to offset the demand-like impact of uncertainty by cutting short-term interest rates.

Using our estimated model, we can assess the likely magnitude and duration of the macroeconomic effects of the current uncertainty spikes associated with the COVID-19 pandemic. In particular, an uncertainty shock that boosts the VIX to a level comparable to that observed in the past few weeks raises the unemployment rate by about 1 percentage point in roughly 12 months. The same uncertainty shock would reduce the inflation rate by about 2 percentage points in about six months. In turn, monetary policymakers would be expected to rapidly bring the policy rate down to the effective lower bound, as was indeed the case when the Federal Reserve cut its federal funds rate in March.

In addition to the tragic human toll, the COVID-19 pandemic will severely reduce economic activity as nonessential retail and other business activity is curtailed and social distancing policies and quarantines force people to stay home. The negative impact on the economy can be further amplified and prolonged by rising uncertainty. Our estimates in this Letter suggest that the spikes in uncertainty triggered by the COVID-19 pandemic will contribute to a protracted increase in unemployment and a significant decline in the inflation rate in the United States. The Fed’s decision in March to cut the federal funds rate to a near-zero level can partly cushion these demand-like effects resulting from the more uncertain environment.

Zheng Liu is vice president and director of the Center for Pacific Basin Studies in the Economic Research Department of the Federal Reserve Bank of San Francisco.