Coronavirus and the Risk of Deflation

The pandemic caused by COVID-19 represents an unprecedented negative shock to the global economy that is likely to severely depress economic activity in the near term. Could the crisis also put substantial downward pressure on price inflation? One way to assess the potential risk to the inflation outlook is by analyzing prices of standard and inflation-indexed government bonds. The probability of declining price levels—or deflation—among four major countries within the next year indicates that the perceived risk remains muted, despite the recent economic turmoil.

The rapid spread of the coronavirus disease 2019 (COVID-19) and the massive lockdown measures that policymakers and health officials around the world have taken to combat it represent an unprecedented negative shock to global demand and supply. On the demand side, social activities like dining out, travel, and tourism have almost completely halted, and consumer spending more generally has dropped substantially. On the supply side, production shutdowns that started in China early this year have spread elsewhere, even as activity in China has ramped back up. This has severely disrupted global supply chains.

Normally such demand and supply restrictions would have offsetting effects on price inflation. However, the severity and public enforcement of social distancing and shelter-in-place orders suggest that constraints on demand will dominate. This is already reflected in such things as plummeting global oil prices. Relatedly, Leduc and Liu (2020) argue that uncertainty effects of the coronavirus shock may reduce aggregate demand enough to lower the U.S. inflation rate by as much as 2 percentage points. The resulting downward pressure on prices could undermine the price stability goals of major central banks around the world.

In this Letter, we focus on the risk of a significant drop in inflation from its current level. Specifically, we assess the risk of deflation—that is, the probability of negative inflation or a net decline in price levels—within the next year. While an increase in inflation is also a possibility, we focus on deflation risk because it represents a particular challenge for the credibility of monetary policy in the context of already prolonged low inflation in many leading economies. To assess this risk, we use yield curve models of nominal and real government bond yields from four major countries: Canada, France, Japan, and the United States. These models also allow us to estimate the premium investors attach to this risk. Our results suggest that the risk of deflation remains muted in all four countries despite the recent global economic turmoil. Furthermore, even the priced risk of deflation, which measures investors’ aversion to deflationary outcomes, has barely moved, ticking up only in Japan from already elevated levels. Overall, these results suggest that the perceived odds of deflation occurring in leading economies as a result of the coronavirus crisis are currently low.

For a global perspective on how the pandemic is likely to affect inflation dynamics, we study data from four major economies: Canada, France, Japan, and the United States. Figure 1 shows the year-over-year change in their respective consumer price indexes (CPIs) since 2000. We use these price indexes to adjust the payments of the inflation-indexed bonds we consider later in this analysis and measure the price inflation most relevant for consumers. For Canada and Japan, they are the price indexes targeted by the central bank in setting monetary policy, while this is not the case for France and the United States. 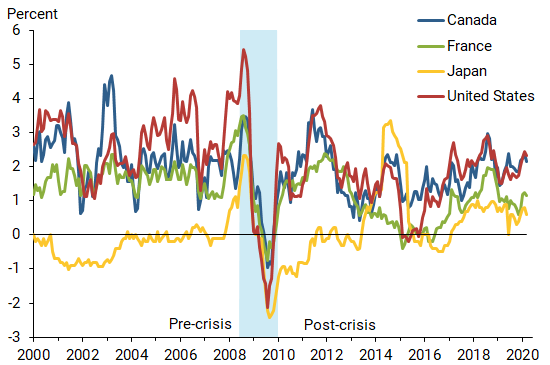 We note that CPI inflation dropped precipitously in all four countries beginning mid-2008 through 2009 (blue shading) during the global financial crisis and never fully recovered to pre-crisis levels, except in Japan, where inflation has remained near zero for the entire 20-year period. Thus, CPI inflation in all four countries had already been running relatively low for the past decade, well before the onset of the coronavirus crisis.

The rapid deterioration in economic activity following the spread of COVID-19 shares some similarities with the economic meltdown during the global financial crisis. Thus, it’s relevant to ask what the downside risks to the inflation outlook are in the current situation: Will any drop in CPI inflation now resemble the size and speed of the declines experienced in the global financial crisis?

Considering the lag in collecting and reporting macroeconomic data such as the CPI and the unprecedented nature of the economic shocks caused by the current pandemic, the historical CPI inflation data in Figure 1 are not likely to be informative about the current state of the economy until many months from now. Instead, we turn to financial market data, which have several notable advantages at this early point in the crisis. First, financial data are available in real time and are not subject to revision. More importantly, they reflect forward-looking expectations among a large and diverse group of investors and financial market participants.

We consider the prices of conventional fixed-coupon bonds that pay a nominal interest rate and so-called inflation-indexed bonds. The latter pay a real interest rate because their cash flows adjust with the change in the CPI and therefore they maintain their purchasing power. Both types of securities are issued and guaranteed by the national governments in Canada, France, Japan, and the United States and hence carry minimal credit risk.

The difference between nominal and real yields of the same maturity is known as breakeven inflation (BEI). This market-based measure of inflation compensation is widely used to assess financial market participants’ inflation expectations. However, there are two potential problems with using BEI for that purpose. First, BEI contains an inflation risk premium, which investors require for being exposed to the uncertainty of future inflation. This premium is embedded in nominal yields that provide no inflation protection. Second, there is a potential difference in market liquidity between standard fixed-coupon and inflation-indexed bonds. The latter tend to have smaller trading volumes, wider bid-ask spreads, and smaller trade sizes. Consequently, the prices of inflation-indexed bonds may include a liquidity premium that investors demand for carrying liquidity risk. This pushes up inflation-indexed bond yields and pushes down BEI, which complicates how well it reflects inflation expectations. The empirical challenge is that neither the inflation risk premium nor the liquidity premium is directly observable and they must therefore be estimated.

In the case of Canada, France, and the United States, we adjust for both the inflation risk premium and any liquidity premiums in the inflation-indexed bond prices using a model of nominal and real yields developed by Andreasen, Christensen, and Riddell (2018). For Japan, we use the Christensen and Spiegel (2019) model of nominal and real yields, which adjusts for the value of deflation protection offered by Japanese inflation-indexed bonds issued since 2013 and for the inflation risk premium; however the model does not adjust for any liquidity premiums due to the unusual maturity composition of Japanese inflation-indexed bonds. Christensen and Spiegel (2019) find that adjusting for the value of this deflation protection is particularly relevant in the context of Japan’s very low inflation, while Andreasen et al. (2018) find that it plays no role for the U.S. data. A similar result holds true for our French data, while the issue is irrelevant for Canada because Canadian inflation-indexed bonds do not protect against deflation. To adjust for these differences, we account for this deflation enhancement only in the model estimation based on the Japanese data. Furthermore, as in Christensen and Spiegel (2019), our Japanese model includes semiannual 10-year survey forecasts of CPI inflation to produce more realistic inflation dynamics.

For all four model estimations, we use end-of-month data through March 2020. The model-implied inflation dynamics allow us to estimate both the risk of deflation over any relevant horizon as well as the premium investors attach to that risk.

The risk of deflation

To assess the downside risk to the inflation outlook, we focus on the likelihood of seeing a net decline in the price level over the following year; this seems to be a relevant length of time to consider in light of the expected duration of the most intense phase of the spread of COVID-19. Figure 2 shows our estimates of this one-year probability of deflation for all four countries. 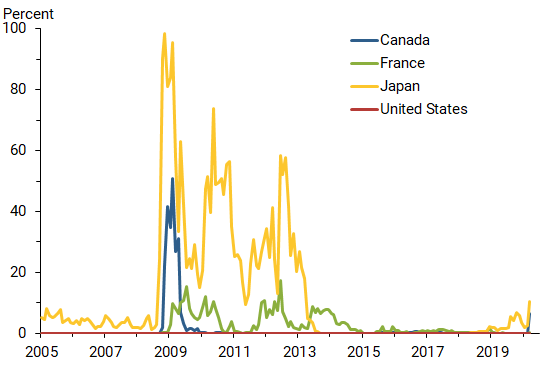 The results reveal that consumer price inflation is not likely to fall negative within the next year given that the estimated probabilities are near zero, except for Japan, which has only a modest risk of 11%. Thus, these results suggest that the current economic disruption may play out differently in terms of expected inflation dynamics than was the case during the global financial crisis.

In Figure 3, we show the resulting five-year deflation risk premiums, calculated as the face value of the five-year yield spreads for all four countries starting in 2005. For Canada and the United States, these data series are flat and close to zero. Thus, deflation risk commands essentially no premium in those two countries. The French series shows a mild upward trend that predates the coronavirus crisis and a modest uptick since its onset. Only Japan has seen a notable spike in this risk measure from the already elevated levels related to its near-zero inflation rate. 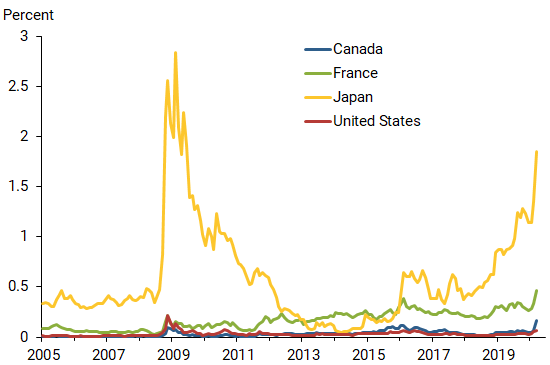 We stress that these measures reflect investors’ sentiment about and aversion to deflationary outcomes, which are only partially correlated with the actual risk of such outcomes examined in Figure 2 at the one-year horizon. Thus, even in terms of sentiment, investors outside of Japan do not seem to be overly concerned about significant downside risks to the inflation outlook in the current uncertain situation.

In this Letter, we assess the downside risk to the inflation outlook caused by the unprecedented negative economic shock following the rapid spread of COVID-19. Analysis of the forward-looking information in nominal and real government bond yields shows that the perceived risk of an outright decline in the price level, or deflation, over the next 12 months has barely changed in the four countries we examine. Furthermore, the premium investors attach to deflationary outcomes has seen at most only a modest uptick, except for in Japan, where this premium was already elevated thanks to its near-zero inflation. Overall, these results suggest that the perceived risks of a substantial decline in inflation are limited in the near term despite the economic standstill caused by the coronavirus.

James M. Gamble IV is a research associate in the Economic Research Department of the Federal Reserve Bank of San Francisco.

Simon Zhu is a research associate in the Economic Research Department of the Federal Reserve Bank of San Francisco.