Small businesses and farms were hit hard by restrictions that limited their ability to pay operating costs during the COVID-19 crisis. Banks played an important supportive role, substantially expanding the loans available to these firms during the early months of the crisis. The growth in lending was associated with small business participation in the Paycheck Protection Program (PPP) and bank use of the PPP Liquidity Facility. Analyzing data for the first half of 2020 suggests that these programs were successful in supporting lending growth during the crisis, particularly among small banks.

The rising threat of the COVID-19 pandemic in March resulted in a sharp increase in bank borrowing by U.S. businesses. This reflected businesses’ widespread concerns about their ability to maintain access to funding in light of worsening economic conditions. In particular, corporate borrowing from banks rose $532 million overall, representing a 5.1% increase in the first half of the year. By comparison, borrowing increased only 3.6% during the first six months of 2019.

As Federal Reserve Governor Michelle Bowman (2020) noted, small businesses, which tend to be service-oriented and clustered in retail and food services, were heavily affected by the pandemic. This Letter examines small business borrowing during the pandemic, highlighting the lending role of small—or “community”—banks. Despite the large number of small banks—defined as those with total assets less than $10 billion—they are dwarfed by medium and large banks in the amount of total lending. However, they are important participants in small business and farm lending. In the sample we study, they comprised about 25% of lending to this category in the second quarter of 2020.

In addition, we examine the role of the Paycheck Protection Program (PPP) launched by the Treasury Department in March under the Coronavirus Aid, Relief, and Economic Security (CARES) Act and administered by the Small Business Administration (SBA). The goal of the program was to help small businesses survive during the pandemic-associated lockdowns. We find that the intensity of participation by banks in the PPP was associated with greater growth in lending to small businesses and farms. Moreover, our analysis shows that bank participation in the Federal Reserve’s Paycheck Protection Program Lending Facility (PPPLF) was also positively associated with their degree of PPP participation, particularly among small banks.

As such, these two programs seem to have encouraged increased lending to small businesses and farms during the COVID-19 crisis. To the extent that small businesses’ credit needs are dependent on their relationships with smaller banks, these programs also appear to have helped reduce the financial strain on small businesses.

Commercial banks in the United States are required to file quarterly Call Reports of their balance sheets and income statements. We use this bank-level data from the end of the fourth quarter of 2019 through the second quarter of 2020 to evaluate lending activity by banks of different sizes during the height of the pandemic lockdowns. We separate banks into three groups: small banks with total assets below $10 billion, large banks with assets exceeding $100 billion, and medium banks with assets ranging between the two. Our year-end 2019 sample includes 4,247 small banks, 641 medium-sized banks, and 138 large banks. These three categories respectively accounted for 7.6%, 12.1%, and 80.3% of total lending during this period, highlighting the outsized role of larger banks.

However, small banks play a much larger role in small business lending. We follow regulatory reporting conventions that define small business loans as being $1 million or less that are issued as either standard commercial loans, secured by nonfarm nonresidential properties, or small agricultural loans of $500,000 or less. The latter category includes loans secured by farmland to finance farm residential and other improvements as well as agricultural production and related activities. While some studies suggest that these reporting thresholds are imprecise indicators of lending to small businesses, we consider the standard definitions of small business and farm lending in our analysis as indicative of overall conditions in the first half of 2020. For these types of loans, small banks accounted for 25.3%, medium banks for 22.4%, and large banks for 52.2% of lending during this period; this highlights the important role of small banks, which provided about a quarter of the total lending to these borrowers.

Lending growth according to bank size

We analyze bank-level lending growth over the first half of 2020 using regression analysis. We follow the literature, such as Rice and Rose (2016) and Li, Strahan, and Zhang (2020), in choosing which Call Report variables to include to account for potentially important disparities in bank characteristics. For example, Cornett et al. (2011) demonstrated that financial constraints during the Global Financial Crisis of 2007–2009 inhibited credit expansion by banks. We account for bank-level characteristics such as the share of assets with high liquidity, the share of funding coming from deposits, the equity–capital ratio, and a measure of outstanding loan commitments. After conditioning on these traits, we examine the differences in lending growth rates across the three bank size categories. The online appendix details these conditioning variables and our formal regression results.

We next focus on growth rates for small business and farm lending. Banks of all sizes experienced sizable increases in lending to small businesses, even after conditioning on bank characteristics. Small banks had an average of 23.2 percentage points more growth than expected. Medium and large banks experienced even higher growth at 37.7 and 34.9 percentage points, respectively. These substantially larger growth rates suggest that small businesses and farms turned to banks for funding and support to weather the business slowdown during the first half of the year.

Impact of the Paycheck Protection Program

The Paycheck Protection Program (PPP) was launched in March under the CARES Act and continued through a second round of lending that closed on August 20. The PPP was intended to help small businesses survive the lockdowns aimed at controlling the pandemic. PPP loans charged only 1% interest with maturities of two to five years. The loans also carry minimal risk because they can be forgiven if borrowers meet certain conditions, such as maintaining employee headcount or salary levels. While interest rate spreads were small under these loans, banks received SBA fee payments, which increased their non-interest income. 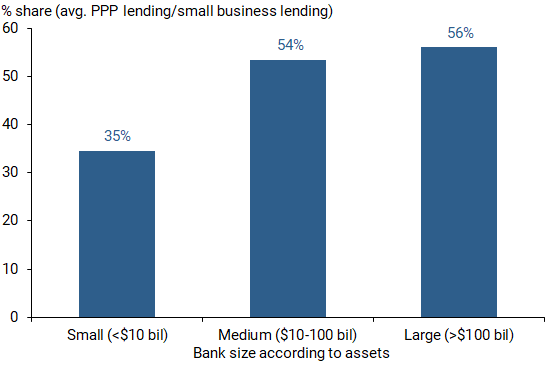 While our results do not establish a causal relationship, they suggest that PPP participation is associated with increased growth in bank lending to small businesses and farms. This result is even stronger when we focus more narrowly on small business loans only. Accordingly, we argue that the PPP was effective in its primary objective of encouraging small business lending.

Impact of the liquidity facility on PPP participation

We are also interested in assessing the effect of the Federal Reserve’s PPP Lending Facility (PPPLF) on the PPP participation. The PPPLF was launched on April 9 and allowed banks to use PPP loans as collateral against central bank borrowing. This made it easier for banks to participate in the program without eroding their liquidity because banks could effectively convert their loans into cash.

Conventional wisdom suggests that small banks would be particularly intensive users of the PPPLF to help them avoid exhausting a substantive share of their liquid assets. That is, a loan of a given size would be expected to mechanically lead to a larger increase in the share of assets extended as loans at a small bank than at a large bank.

This logic is in keeping with the unadjusted averages of PPPLF participation, as shown in Figure 2. The share of small bank PPP loans that were used as collateral for PPPLF borrowing was relatively higher than for other size banks, accounting for almost 25% of PPP lending. As such, while large banks were more active in PPP lending, the PPPLF was a more important contributor to encouraging small bank participation in the program. 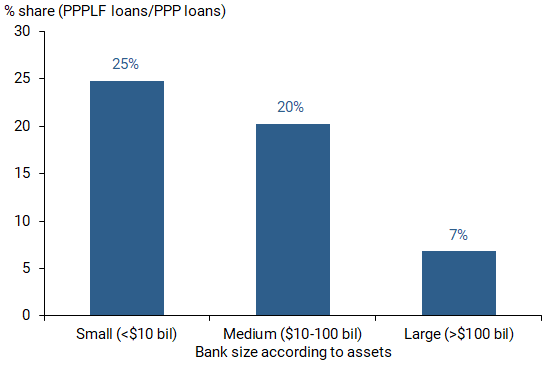 Both overall lending and lending to small businesses and farms grew rapidly during the start of the COVID-19 pandemic in the first six months, as firms secured liquid assets to maintain operations. Our analysis of this lending market shows that small banks were important contributors to this lending growth. Moreover, the launch of the Treasury’s PPP and the Federal Reserve’s PPP Liquidity Facility supported the growth of small business lending among all banks, particularly among small banks.

Jose A. Lopez is a vice president in the Financial Institution Supervision and Credit Department of the Federal Reserve Bank of San Francisco.