Did the $600 Unemployment Supplement Discourage Work?

People receiving unemployment insurance benefits during the COVID-19 recession were entitled to $600 of additional payments per week through July. This large increase in benefit payments raised a concern that recipients would delay returning to work. However, analysis suggests that the available aid would not outweigh the value of a longer-term stable income in workers’ decisions to accept job offers. Evidence from recent labor market outcomes confirms that the supplemental payments had little or no adverse effect on job search.

The onset of the coronavirus disease 2019 (COVID-19) pandemic in mid-March caused a sharp reduction in U.S. economic activity and quickly pushed millions of people out of work. The federal government responded quickly in late March, enacting the Coronavirus Aid, Relief, and Economic Security (CARES) Act. The act substantially enhanced unemployment insurance (UI) benefits, most notably by granting all recipients an additional $600 per week on top of their usual benefit payments through July.

The large increase in UI benefits prompted concern that some recipients might choose to remain unemployed and continue receiving benefits rather than return to their prior positions or start new jobs. If such behavior were widespread, businesses would be less able to ramp up their workforces as conditions improved, thereby slowing down the recovery.

However, this concern overlooks two key considerations. First, when assessing whether to accept a job offer, benefit recipients are likely to place more weight on the long-term income associated with a lasting job than on the temporary income available from UI. Second, labor market conditions have been quite weak, with many job seekers and few job openings. In such a challenging market, generous benefits are not likely to lead job seekers to devote less time and effort to searching for work.

With these considerations in mind, we assess the impact of the $600 supplement on job search. We find little to no disincentive effect from the higher benefits in the data. Our findings emphasize that UI benefits instead served as an important source of economic relief and stimulus.

The federal CARES Act entitled all UI recipients to an additional $600 per week on top of their usual weekly benefits from April through July 2020. This was a huge increase relative to the nationwide average of about $380 per week for normal UI benefits (Stone 2020).

To put the $600 supplement into perspective, Ganong et al. (2020) calculated the implied replacement rates—UI benefits as a fraction of earnings before job loss—with the supplement included, based on 2019 earnings. Their calculations yielded a nationwide median replacement rate of 134%, implying that a substantial majority of UI recipients (68%) would receive benefits that exceeded lost earnings, often by a wide margin. This is very high relative to replacement rates under normal circumstances, which typically average about 50%.

Such generous benefits raise the question of whether job seekers would prefer to prolong receiving UI rather than return to work. A range of empirical studies have identified substantial disincentive effects of sustained UI generosity on job search in relatively healthy labor markets (Schmieder and von Wachter 2016). However, such disincentive effects are less likely in the current labor market environment given the temporary nature of the benefit supplement and weak labor market conditions.

Effects of benefits on job acceptance

To assess whether unemployed individuals are likely to reject available jobs in favor of continuing to receive UI benefits, we need to compare the value of an entire job spell to the value of remaining unemployed. The average U.S. worker earns around $1,000 per week in a job that typically lasts two years. This persistent income stream implies that the value of a job offer is much greater than just the weekly paycheck. An informed job seeker will compare that income stream to UI benefits that may expire before they find another job.

A recent research paper explores this idea in detail (Petrosky-Nadeau 2020). The paper identifies a reservation benefit, which represents the dollar amount of weekly UI payments necessary for a recipient to be indifferent between accepting a job offer at the previous wage and rejecting it to remain unemployed. A worker will accept a job offer if the current level of UI payments is below this reservation benefit. Because the typical job lasts much longer than UI payments, the reservation benefit often exceeds the prior wage.

Petrosky-Nadeau (2020) calculates the reservation benefit for a wide variety of workers during the period covered by the CARES Act, using Bureau of Labor Statistics data from the Current Population Survey (CPS). The results suggest that few groups of workers would refuse an offer to return to work at their previous pay. For example, a worker with a high school diploma who typically earned $800 per week would receive total UI payments under the CARES Act of $1,000 per week—or 125% of their previous wage. The reservation benefit calculations indicate that they would need an additional $250 per week in benefits before they would consider rejecting a job offer in early May 2020.

Figure 1 illustrates the range of reservation benefits across a variety of occupations compared with UI payments under the CARES Act. A typical state UI program offers 50% of prior weekly earnings up to a $500 cap. The figure shows regular unemployment benefits by level of weekly earnings (red line) and total benefits including the CARES Act supplement (green line). The gray shaded area depicts UI payments below 100% of the previous wage. Blue dots indicate the reservation benefit levels for selected occupations. 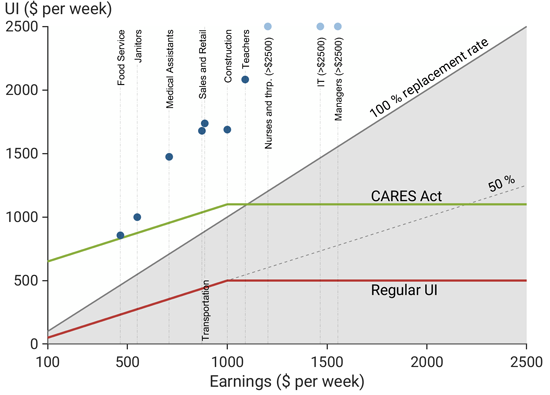 The figure illustrates that the value of a job significantly outweighs the value of temporary additional UI benefits. Consider the situation during the first week of June 2020, with only eight weeks of supplementary payments remaining and states moving to reopen their economies. At that time, only workers in the lowest paid occupation—food services, with typical earnings of $460 per week—would be indifferent between accepting a job offer and remaining unemployed. For all other occupations, wage replacement rates over 100% during the pandemic were unlikely to induce people to reject job offers.

Impact of benefit amounts on jobs from recent data

To directly assess how the increased UI benefits affected actual worker decisions over the past few months, we turn to the data on job search outcomes.

First we note that labor market conditions are key; in a weak labor market, job seekers competing for a limited number of available jobs are likely to be relatively unaffected by the level of UI benefits. Indeed, the reservation benefit just discussed rises when jobs become scarce. Kroft and Notowidigdo (2016) confirmed that the disincentive effect from unemployment benefits is sensitive to labor market weakness. Their results imply that the effect disappears when state unemployment rates rise above 8%, well below recent levels.

We assessed the disincentive effect of the $600 UI benefit supplement using a slight modification of the statistical regression framework in Valletta (2014). The analysis relies on CPS individual data matched across consecutive months, which allows us to measure whether unemployed individuals find jobs between one month and the next. The regression includes extensive controls for individual and job characteristics, state labor market conditions such as unemployment rates and employment growth or losses, and monthly changes that are similar in all states.

We focus on the impact of variation across states in the generosity of available UI benefits, combining normal benefits with the $600 CARES Act supplement. We measure UI generosity using the median replacement rates by state from data provided by Ganong et al. The impact of the $600 supplement on replacement rates varies depending on state wage structures, and it only became effective in the data starting in April. Therefore, we can compare job-finding outcomes between individuals in different states before and after the $600 supplement became available to assess its impact. Economists refer to this statistical design as a “difference-in-differences” regression.

Figure 2 shows the estimated impact of cross-state variation in UI generosity on the likelihood of finding a job during January through July 2020. The figure compares the evolution of job-finding rates for the typical individual in states that are toward the high and low ends of the range of UI replacement rates under the CARES Act. Specifically, we compare individuals in states at the 90th and 10th percentiles based on a ranking of states from lowest to highest replacement rates.  The figure shows little or no evidence of a disincentive effect of UI benefit generosity on finding and accepting new jobs. To the contrary, individuals in states with more generous UI benefits on average generally found and accepted jobs more rapidly than those in states with less generous benefits, although the pattern was modestly reversed in July. 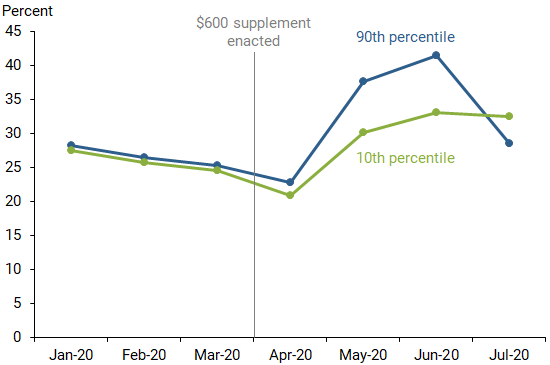 Note: Outcomes for typical individuals in states at the 90th and 10th percentiles of the distribution of UI replacement rates under the CARES Act.

These findings suggest that the primary impact of the UI supplement was to provide the income needed for households to make essential purchases and payments, thereby helping to sustain overall economic activity and employment. This is consistent with the conventional “automatic stabilizer” or stimulus role of UI payments. This conclusion is reinforced by the pattern in Figure 2 of a sharp pickup in job-finding rates in May and June, when the $600 supplement became widely available.

This statistical framework is not airtight. Most notably, it relies on measuring benefit variation broadly at the state level rather than precisely at the individual level. However, our complete analysis provides consistent evidence that the $600 supplement did not make people less willing to search for work. More extensive analysis in Altonji et al. (2020), based on alternative data sources and individual estimates of UI replacement rates, yielded similar findings.

Conclusion: The stimulus role of UI

The findings in this Letter suggest that the $600 UI benefit supplement in the CARES Act had little or no effect on the willingness of unemployed people to search for work or accept job offers. This likely reflects the appeal of a sustained salary compared with even very generous unemployment benefits when labor market conditions are weak and virus containment measures prevent hiring. Stated more starkly, with infrequent job offers and supplemental UI payments being only temporary, job seekers do not have the luxury to be choosy and delay accepting a job in favor of continuing to receive benefits.

The limited impact on job search highlights the traditional stimulus role of UI benefits, to help replace the lost income of displaced workers in an economic downturn. Expanded UI benefits from the CARES Act appeared to be an important source of aggregate stimulus rather than an impediment to labor market improvement. When a durable labor market recovery starts, the disincentive effects of UI generosity may become more important. In the meantime, our findings suggest that a renewal of the UI benefit supplement would be an effective way to maintain economic activity without distorting search behavior and holding back job growth.

Robert G. Valletta is a senior vice president and associate director of research in the Economic Research Department of the Federal Reserve Bank of San Francisco.