Unemployment fell at a slow and steady rate in the 10 cyclical recoveries from 1949 through 2019. These historical patterns also apply to the recovery from the pandemic recession after accounting for the unprecedented burst of temporary layoffs early in the pandemic followed by their rapid reversal from April to November 2020. Unemployment for other reasons—which has been most important in other recent recoveries—did not start declining until November 2020. Since then, unemployment for other reasons has declined at a faster pace than its historical average.

The global pandemic caused an unprecedented surge in the U.S. unemployment rate, followed by a rapid decline. From February to April of 2020, the unemployment rate spiked from 3.5% to 14.8%. Starting in May, unemployment dropped 8 percentage points over the first seven months of the recovery, falling to 6.7% by November 2020. Since then, the pace of the decline has slowed substantially, with a further drop of about 2 percentage points to 4.6% as of October 2021.

In this Letter, we consider how unemployment in the pandemic has been different from recoveries over the past 70 years and how it has been the same. The initial unemployment recovery was much faster during the pandemic  recovery than in the past. For example, following the 2007–09 recession, it took 10 years for total unemployment to decline by 6.5 percentage points. The rapid recovery immediately following the spike in April 2020 led some people to predict that unemployment would quickly return to its pre-pandemic level, which it has not done.

From examining the historical patterns of unemployment, we find that unemployment recoveries from 1949 through 2019 were inexorable (Hall and Kudlyak 2021a). Unemployment rose rapidly in 10 economic crises. The crises that propelled unemployment sharply upward had widely different causes. For example, the 1981 recession resulted from a sharp monetary contraction, while the 2007 recession got its severity from the financial crisis.

Despite different reasons for rising unemployment, following each crisis the unemployment rate glided downward on a predictable recovery path. The glide continued until unemployment reached about 3.5% or until another crisis interrupted the glide. Despite considerable variation in monetary and fiscal policy, and in productivity and labor force growth, the rate of unemployment decline was remarkably similar across these episodes. The economy seemed to have an irresistible force restoring full employment at a pace that remained relatively constant throughout the past 70 years.

Figure 1 displays the unemployment rate expressed in natural log values during the 10 completed recoveries since 1949; to highlight the recovery patterns, we exclude the periods of sharply rising unemployment during recessions. The figure reveals a key historical fact about recoveries: the log of the unemployment rate tends to fall in a virtually straight line, indicating a relatively steady proportional decline in the actual rate over time. 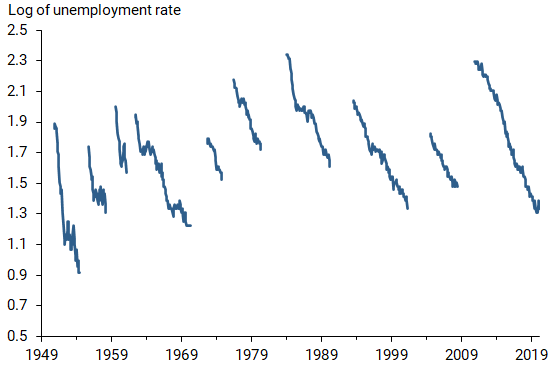 In Hall and Kudlyak (2021c), we examined why unemployment tends to recover so consistently slowly in economic recoveries. We find that a typical crisis breaks employment relationships, and the process of creating new stable relationships is time-consuming. Workers who lost jobs often cycle through short-term jobs with spells of unemployment and being out of the labor force before finding stable employment (Hall and Kudlyak 2019). We find that high unemployment further slows down the job search and matching process. For example, employers face additional costs in selecting the most suitable prospective workers from among the many applicants; this can make it more difficult for other job seekers to find the right jobs, in addition to those who lost jobs in the crisis.

Two kinds of unemployment during the pandemic recession

Historically, the vast majority of people who were counted as unemployed were jobless—meaning they were not on layoff from a continuing job. At the start of the pandemic recession, however, an unprecedented number and fraction of the unemployed were on temporary layoff and had a good chance of being recalled to their prior jobs (see, for example, Wolcott et al. 2020).

Figure 2 shows the temporary-layoff and jobless unemployment rates, from January 1965 to the latest data available, October 2021. We classify unemployed workers into these two groups based on their reported reason for unemployment and then divide each group by the size of the total labor force. 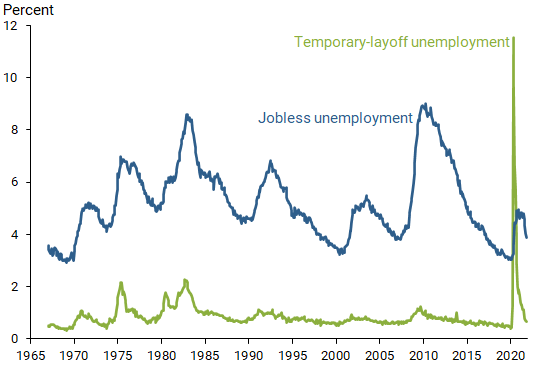 Unemployment recovery from the pandemic recession

Figure 3 shows the path of actual jobless unemployment (solid line) and the hypothetical path starting from November 2020 if the recovery had been on its historical path (dashed green line). The deviation of those two lines during the period from the recent peak in November 2020 through October 2021 indicates that the recovery of jobless unemployment has been more than double its historical rate. 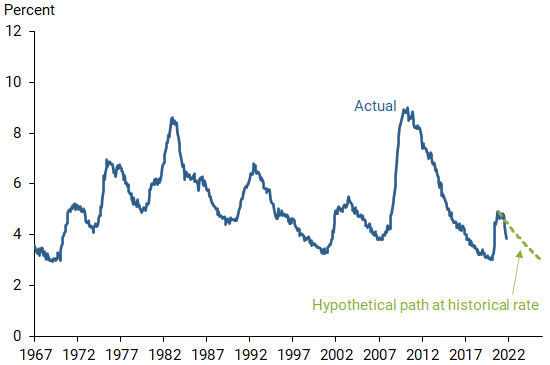 Hall, Robert E., and Marianna Kudlyak. 2021b. “The Unemployed with Jobs and without Jobs.” FRB San Francisco Working Paper 2021-17.

Hall, Robert E., and Marianna Kudlyak. 2021c. “Why Has the U.S. Economy Recovered So Consistently from Every Recession in the Past 70 Years?” NBER Macroeconomics Annual 2021, volume 36.