Climate change—including higher temperatures and more extreme weather—is already causing economic damage and is projected to have further long-lasting effects. To properly assess the potential future economic losses from climate change, they must be discounted to produce comparable values in today’s dollars. The discount rates required for this assessment are influenced by the long-run equilibrium real interest rate, which has declined notably since the 1990s. Accounting for a persistently lower real rate increases the present discounted future costs of climate change, which is relevant for climate policy choices.

A significant portion of today’s greenhouse gas emissions caused by burning fossil fuels will remain in the atmosphere for centuries, warming the earth. Therefore, current carbon pollution, notably carbon dioxide (CO2) emissions, is creating climate hazards for generations to come. In January 2021, the U.S. Interagency Working Group on the Social Cost of Greenhouse Gases (IWG) took on the task of evaluating the potential harm from climate change using the best available science and economics. Their initial report (IWG 2021) noted the importance of reviewing the assumptions about the discount rate used to formulate a climate policy cost-benefit analysis. A discount rate converts future costs and benefits into present-day versions that can be appropriately compared. Given the long-term persistence of climate change and the associated economic losses, determining the precise level of the discount rate is crucial for assessing the cost of climate change and the value of efforts to reduce carbon emissions.

In this Economic Letter, based on Bauer and Rudebusch (2021), we describe the connection between recent lower real, that is, inflation-adjusted, interest rates and the discount rate to use for assessing the future costs of climate change. Specifically, the widely documented decline in the equilibrium or steady-state real interest rate over recent decades translates into persistently lower expected future real interest rates. This downward shift implies lower discount rates, which would boost estimates of the discounted future costs of climate change. Such increased climate costs are an important consideration for policies related to carbon pricing and the reduction of greenhouse gas emissions.

In a cost-benefit analysis, near-term costs must often be weighed against future benefits. For example, while investing today in cleaner technologies and equipment can reduce the amount of CO2 in the atmosphere, the up-front costs must be weighed against the future benefits of less environmental and economic damage resulting from climate change. This cost-benefit analysis is particularly challenging because a substantial share of the expected damage from current carbon emissions accrues in the far future. This lag occurs primarily because a significant fraction of greenhouse gas emissions remains in the atmosphere for more than a century, causing hotter global surface temperatures and other adverse environmental shifts.

To value the future costs of climate change, it is necessary to discount them to produce their present value in today’s dollars. The social cost of carbon (SCC) does exactly this: it measures the expected present discounted value of future damage caused by releasing one more ton of CO2 into the atmosphere today. The damage from increases in atmospheric greenhouse gases include property destruction from more intense storms, wildfires, and floods, diminished labor productivity from harsher working conditions, and elevated mortality rates from longer heat waves (Carleton and Greenstone 2021). Furthermore, financial regulators are increasingly worried about associated climate-related financial risks (Rudebusch 2021). This broad set of potential losses highlights the fundamental economic problem of climate change: the overall cost to society of burning fossil fuels is much higher than the current market cost of that combustion.

In 2010, the U.S. federal government began to use the SCC as a metric to help guide policy decisions in cost-benefit analyses (IWG 2021). For example, efficiency standards for appliances, motor vehicles, and power plants were set to balance the cost of obtaining lower carbon emissions against the benefit of reduced future climate damage. In 2013, the federal government’s central SCC estimate was around $50 per ton of CO2, which provided an extra hurdle for approval of regulations or projects that would add to carbon pollution. More broadly, the SCC can serve as a useful benchmark for carbon pricing, which places a direct cost on carbon pollution through emissions trading or a carbon tax.

An important feature of the ongoing update of the U.S. government estimate of the SCC is to reexamine the extent to which future climate damage should be discounted (IWG 2021, Carleton and Greenstone 2021). The appropriate way to account for the wide-ranging costs of climate change to society is to employ an economy-wide or social discount rate (SDR). A lower SDR would imply less discounting of future climate change costs and a higher SCC.

Figure 1 illustrates how sensitive present values—like the SCC—are to discounting over long time horizons. With a 3% discount rate—the SDR commonly used in previous SCC calculations (IWG 2021)—the value of $1 billion in the year 2100 is only $94 million in 2021. Instead, by using a 1% discount rate, the current present value of $1 billion at the end of the century increases fivefold to $451 million. The value of the SDR is especially important for evaluating climate policy investments because the harm caused by carbon emissions persists for generations, and the effect of discounting such future costs gets magnified over time due to compounding. A lower SDR supports spending more now to protect future generations from climate change damage. 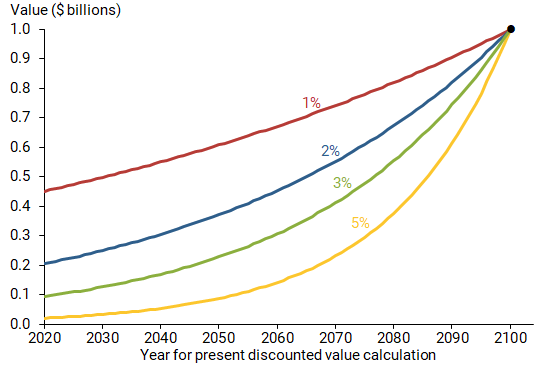 The decline in the equilibrium real interest rate

Much research has considered the question of the appropriate discount rate for assessing climate policies. One approach uses observed interest rates and returns to calibrate the SDR, based on the assumption that financial markets properly price the relevant intertemporal tradeoffs for society over different time horizons. To apply this descriptive approach, it is crucial to know the equilibrium real interest rate, or r-star, which is the expected long-run average of the real interest rate (Bauer and Rudebusch 2021). For example, if the current real short-term interest rate were 1%, and r-star were 2%, then interest rates would tend to rise over time toward 2%. By contrast, if the current short-term rate were 3%, then a gradual decline would be expected. In either case, long-term SDRs—which are shaped by longer-run expectations of the real interest rate—would be close to the r-star of 2%. This argument generally implies that the value of r-star anchors SDRs at all horizons. Moreover, even risk-adjusted discount rates that account for the uncertainty of climate impacts would be affected by changes in r-star.

One insight from recent macro-finance research is that the expected long-run average of the real interest rate is not a fixed value but regularly adjusts to persistent global economic shifts (Bauer and Rudebusch 2020). Since the 1990s, various factors—including an aging population, greater income inequality, and slower productivity growth—have tended to increase the supply of savings and lessen investment demand. As a result, there has been a pronounced decline in the equilibrium real interest rate. Empirical estimates across a wide range of methods and data sets generally agree that r-star has declined about 1 to 2 percentage points over the past three decades (see, for example, Christensen and Rudebusch 2019 and Bauer and Rudebusch 2020, 2021).

As an example, Figure 2 shows the real one-year interest rate (red line), calculated as the difference between the one-year U.S. Treasury yield and survey-based inflation expectations. Along with pronounced cyclical fluctuations, this interest rate has persistently declined since the 1990s. Bauer and Rudebusch (2021) show how statistical models can be used to separate this series into trend and cycle components. The resulting estimated trend component, r-star (blue line), has fallen a little more than 1 percentage point since 1990, in line with previous research. 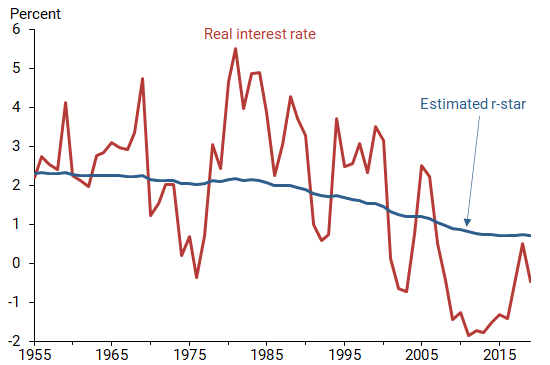 The decline in the r-star anchor for real interest rates going forward raises questions about how SDRs and climate policy assessments have changed in recent decades. In Bauer and Rudebusch (2021), we formalize the link between the equilibrium interest rate and SDRs and empirically demonstrate how both have shifted lower in recent decades. Figure 3 shows two of our estimates of the term structure of SDRs—that is, the full set of SDRs appropriate for discounting costs at various horizons—based on interest rates and r-star estimates at two points in time. For the first, in 1990, the estimated SDR term structure starts at 2% for short-term discounting and is a bit lower at longer horizons (red line). For the second, in 2019, persistently lower real interest rates and the secular decline in r-star translate into SDRs that are ½ to 1 percentage point lower at all horizons (blue line). In both years, the term structures of SDRs slope downward, with long-term rates expected to be lower than short-term ones. These downward slopes reflect the uncertainty about future short-term interest rates. 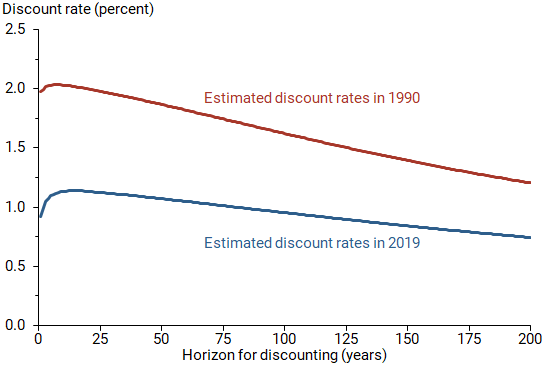 The downward shift in SDRs over the past 30 years has important consequences for estimates of the economic costs of climate change. As Figure 1 shows, a drop in the discount rate from 2% to 1% greatly increases the present value of far-off damage—consistent with higher estimates of future climate costs and a higher SCC. A straightforward way to quantify the effect of a lower discount rate is to compare the SCC calculated with the old 1990 and the current 2019 estimated discount rate term structures—applying each to the same assumed expected path of future damage from additional carbon emissions. We do this in Bauer and Rudebusch (2021), using climate change damage from various empirical models of the interactions between the climate and the economy. The resulting levels of the estimated SCC vary depending on the specific models used to estimate discount rates and climate damage. However, the associated increases in the SCC from 1990 to 2019 are always substantial because the declines in r-star and the SDRs are robust across a wide range of models. Indeed, across a variety of specifications, we find that the estimated SCC at least doubles in size when using the most recent estimates of low discount rates. That is, an SCC of $50 calculated using 1990 interest rates would be at least $100 when updated with current discount rates.

The lower new normal for interest rates that has developed over the past three decades has pushed down the entire term structure of discount rates that is relevant for assessing future climate costs. This downward shift substantially boosts the present discounted cost of the expected economic damage from climate change. Therefore, recent trends in real interest rates are relevant for climate policy decisions aimed at mitigating or adapting to climate change.

Michael D. Bauer is a professor of financial economics at the University of Hamburg and research advisor in the Economic Research Department of the Federal Reserve Bank of San Francisco.

Bauer, Michael D., and Glenn D. Rudebusch. 2021. “The Rising Cost of Climate Change: Evidence from the Bond Market.” Forthcoming in Review of Economics and Statistics.