The Unequal Effect of Interest Rates by Race, Gender

Household spending typically falls as interest rates rise, but the responses vary by race and gender. Data show that households with mortgages headed by white women cut their spending on durable goods about a quarter percentage point in the three years following a 1 percentage point increase in interest rates. This is a much larger reduction than for households with mortgages headed by white men or Black men or women. The differences highlight the challenge of understanding how policy interest rate changes affect a diverse population.

This Economic Letter was developed through the San Francisco Fed’s Unlocking Our Potential essay contest for graduate students.

After dropping interest rates to near zero at the onset of the COVID-19 pandemic, the Federal Reserve began raising its short-term policy rate earlier this year and has indicated that ongoing increases will likely be necessary to contain inflation. Such changes in interest rates impact many parts of the economy, including business investment, worker salaries and jobs, and borrowing rates. Ultimately, monetary policy affects how much consumers can spend, and those spending decisions can vary widely across different groups.

Demographic groups broken down by race and gender have different levels of income and wealth, hold different types of jobs that are more or less vulnerable in economic downturns, and face different mortgage refinancing options. As such, they are likely to be affected differently by changes in monetary policy that cause interest rates and financing costs to rise.

In this Economic Letter, I analyze how household spending responds to unexpected changes in interest rates. I specifically focus on four groups of households, those headed by white women, white men, Black women, and Black men. I also consider whether households have mortgages, own their homes, or rent because housing makes up a large part of household expenses. Changes in interest rates also directly influence the mortgage refinancing rates available to households and thus affect the amount they can spend on other goods.

Higher interest rates are expected to reduce consumer spending by raising financing costs for home mortgages and purchases of durable goods. However, this study finds that the group of households that have mortgages and are headed by white women is the only group that considerably cuts back on durable spending. Black households reduce their spending on everyday goods and services more than white households, but not their spending on durable goods. This finding that groups react differently in response to unexpected rate changes sheds light on the challenge of understanding the unequal impact of monetary policy. 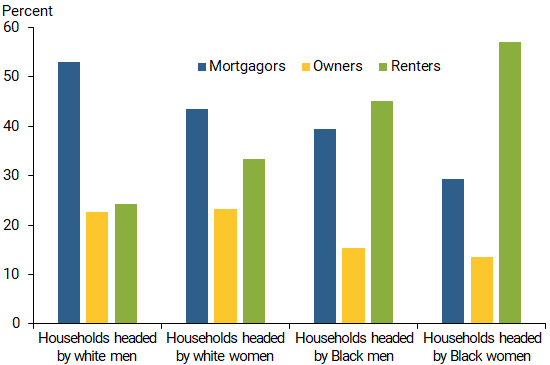 The significant differences in Figure 1 suggest that these groups will be affected differently by policies that change borrowing rates, such as those for mortgages. In this Letter, I build on research by Cloyne, Ferreira, and Surico (2020), who emphasize considering household debt levels when studying how monetary policy affects consumer spending. They find that mortgagor household spending increases more as households refinance mortgages when interest rates are lowered, thereby raising their spending ability. I expand the level of detail for this analysis using 1984-2007 data from the Consumer Expenditures Survey.

I use a statistical analysis known as a regression to estimate how household spending changes during the three years following an unexpected change in the federal funds rate. The specific regression is based on the adapted local projections method of Coibion et al. (2017). It uses unexpected monetary policy data identified in Cloyne et al. (2020), while also accounting for measures of inflation, unemployment, and time.

Based on these broad spending patterns, I next compare how spending changes in three years for different groups following a 1 percentage point unexpected increase in the federal funds rate. I focus on mortgagor households because they are very sensitive to interest rates and hold relatively similar levels of wealth. I also focus primarily on spending for durable goods, such as computers, appliances, and cars, which are typically more expensive than everyday items and often require people to arrange financing for purchases.

Figure 2 shows the average and range of the total spending response for different households with mortgages in the three years following an increase in the federal funds rate. White households cut their spending on durable goods, although the response is two times larger for households headed by white women. Households headed by Black women decrease durable spending at a similar rate as those headed by white women but not significantly, as shown by the ranges in Figure 2 overlapping with zero change. Households headed by Black men slightly increase their durable spending, but this response is also not statistically significant. Possible reasons for variations between genders and races include differences in job security, family income, and access to mortgage refinancing options, which I discuss more in the next section. 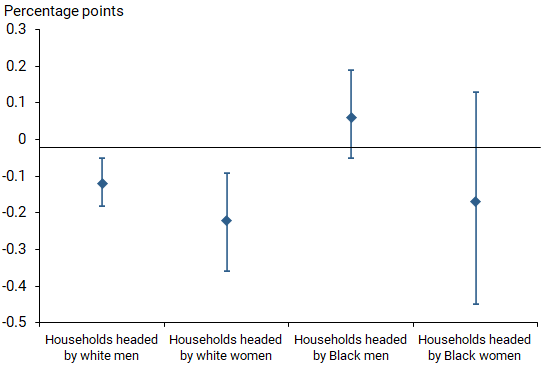 The differences in the size, direction, and timing of spending suggest that these demographic groups have different preferences for what they buy and when they buy it. These preferences may in part be due to income and wealth differences across groups, with some being more constrained than others in their spending. The estimates for Black households also are less precise because the data reflect relatively smaller sample sizes and higher volatility of spending patterns.

Other research has found similar results, showing that interest rate hikes worsen employment, income, and consumption inequality (Coibion et al. 2017) and affect Black and white people differently and women and men differently (Elson 1993). Unemployment and household wealth are also found to respond differently between races and genders, with the largest gaps between Black women and white men (Seguino and Heintz 2012 and Bartscher et al. 2022). It is thus crucial to study the effects of monetary policy by demographic subcategories, such as gender and race, to better understand its transmission.

What explains the variation in spending patterns across groups?

One expected response to higher interest rates is that all people will hold less money and thus spend less. However, overall consumption is stable and, in a typical recession, falls moderately or not at all. My analysis suggests that the theory that people spend less most closely reflects the responses of mortgagor households headed by white women, who decrease their spending by 0.22 percentage points three years after the unexpected rate hike. This estimate is significant given the constancy of consumption patterns. Households headed by white men decrease their spending minimally, by 0.12 percentage points. Households headed by Black women react more than those headed by Black men, but their responses are not clearly negative and thus are less responsive than white households.

The contrasting household responses are likely to reflect gaps in average income due to differences in education, age, family composition, or potential discrimination between demographic groups. On average, the Consumer Expenditures Survey shows that households headed by women have lower per capita family incomes than those headed by men, and Black households have lower incomes than white households. This distribution reflects the trends in the overall U.S. population, as men and white workers have more access to higher-paying jobs. Households with higher incomes are likely to change their spending tendencies less when interest rates change because they have extra income to fall back on. In contrast, households that live paycheck to paycheck are more likely to adjust how much they buy if the amount of money they have suddenly changes due to interest rates changing.

Another characteristic that affects household income and spending is whether two adults in the household work versus one. In the sample, 61% of households headed by women have no spouse, while only 38% of households headed by men have no spouse. Black heads of household, especially women, are more likely to be single and support their family alone, while more white heads of household, especially men, have spouses that support the family both economically and in care work. Among households headed by men, 60% of spouses who do not earn an income instead take care of the household, providing unpaid care work and increasing family welfare. In contrast, in households headed by women, spouses who do not work are usually retired (63%) or ill or disabled (20%). While these spouses may provide income from pensions, they may not explicitly contribute to housework, which can lead to an additional burden on working women to provide unpaid care. According to Banks (2020), Black households, especially those headed by Black women, experience further difficulties due to their lesser access to public and private goods, causing them to rely more on community care support that is often provided by Black women. This inequality of within-household distribution of income and unpaid work likely affects decisions on consumption spending.

Since households headed by men are more likely to have higher incomes and a spouse that either has a salary or provides family care, they are probably more financially secure. If they refinance their homes and thus have more funds available, they may be more likely to fall back on their higher incomes and wealth. Changes in interest rates therefore may not affect this group as much as they would affect other households that would spend any extra money they receive, such as those who are single earners or those responsible for providing both income and family care. The unexpected lack of a strong spending response among Black households could also be due to systemic racial inequalities in access to financial information, mortgaging refinancing options, and appropriate housing valuations. These outcomes as well as an evaluation of renter household responses warrant further study.

While interest rates are currently rising across the United States, this Economic Letter suggests that they don’t affect all groups equally. Households headed by whites, Blacks, women, and men change their spending differently in reaction to unexpected interest rate hikes. These variations are prominent among households with mortgages, which are shown to reflect the expected responses for overall household spending. Households headed by white women follow overall trends for spending more than those headed by men. Black households have smaller spending responses. My findings suggest that understanding how interest rate changes affect different demographic groups can shed light on the transmission of monetary policy to the economy and thus potentially improve policymakers’ economic predictions.

Aina Puig is a PhD student at American University, Washington, DC, and a summer Research Scholar in the Economic Research Department of the Federal Reserve Bank of San Francisco.

Banks, Nina. 2020. “Black Women in the United States and Unpaid Collective Work: Theorizing the Community as a Site of Production.” The Review of Black Political Economy 47(4), pp. 343–362.

Seguino, Stephanie, and James Heintz. 2012. “Monetary Tightening and the Dynamics of U.S. Race and Gender Stratification.” American Journal of Economics and Sociology 71(3), pp. 603–638.