Households are currently expecting inflation to run high in the short run but to remain muted over the more distant future. Given this divergence, what role do short-run and long-run household inflation expectations play in determining what workers expect for future wages? Data show that wage inflation is sensitive to movements in household short-run inflation expectations but not to those over longer horizons. This points to an upside risk for inflation, as workers negotiate higher wages that businesses could pass on to consumers by raising prices.

The U.S. labor market has rebounded strongly from the deep pandemic-related recession and is now very tight. Employment is back at pre-pandemic levels, job openings are surpassing the number of unemployed workers, and people are quitting jobs at high rates. Reflecting the difficulties businesses face in finding workers, wages have climbed substantially. Wages were growing about 3% annually before the pandemic, when the labor market was also tight; now, average hourly earnings are growing at roughly twice that rate, and even more in some sectors hit hardest during the pandemic, such as leisure and hospitality. Other measures, such as employment wage costs that control for worker shifts between occupations and industries, are up almost as much.

However, the substantial nominal wage gains have not been enough to compensate for the rise in inflation over the past year. The 12-month change in consumer price inflation has risen from 1.4% at the start of 2021 to more than 9% in June 2022. As a result, real wages, which adjust for the rising cost of living, have declined.

This increase in inflation was mostly unanticipated and expected by many to be temporary. Thus, it was likely not a major factor in wage negotiations until recently. However, if inflation remains very high, workers may expect it to persist and demand higher wages to match the rising cost of living (Lansing 2022). While the inflation rates that households expect over the longer run remain fairly stable, year-ahead inflation expectations have risen substantially since early 2021. In April 2022, year-ahead expected inflation was up to 5.4% before receding slightly to 5.2% in July. Therefore, future wage inflation depends in part on its sensitivity to short- and long-run inflation expectations.

The recent evolution of inflation expectations

Every month the University of Michigan conducts a survey of consumers. As part of this survey, a representative group of households are asked about their expectations for future inflation, either in the short run over the next year, or over the longer run, the next five to ten years. Figure 1 shows that household one-year-ahead inflation expectations have risen dramatically over the past year, in line with higher actual inflation. Historically, household short-run inflation expectations are highly sensitive to recent changes in inflation: the two series have a correlation of 0.91 between 1980 and June 2022. In assessing what inflation is likely to be in the year ahead, households are particularly influenced by recent changes in gas, food, and other commodity prices (Glick et al. 2021). Thus, it is not unusual to see spikes in household inflation expectations following fluctuations in those prices, as in 2008 and 2011.

In contrast to the substantial rise in household short-run inflation expectations, Figure 1 shows that households continue to expect only moderate inflation over the longer run, expecting prices to rise roughly 3% on average. This may reflect a perception that the recent inflation increase is driven by temporary factors, for instance, the effects of fiscal support or supply-chain disruptions, which will wane over time (Barnichon et al. 2021, Jordà et al. 2022). Alternatively, they may expect the Federal Reserve to raise interest rates sufficiently to reduce inflation over time, even if underlying shocks prove persistent.

The considerable rise in short-run inflation expectations may lead workers to demand higher wages to compensate for the anticipated rise in the cost of living. However, businesses may be reluctant to give large pay increases if price pressures are expected to be temporary, particularly if they are unable to pass higher costs on to consumers. Thus, it is unclear how much wage growth responds to changes in short- or long-run inflation expectations. 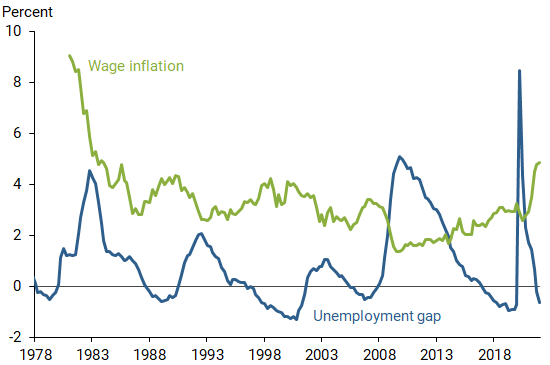 In addition to the unemployment gap, our wage Phillips curve includes household short-run and long-run inflation expectations from the University of Michigan, and lagged core price inflation, which abstracts from volatile food and energy price inflation, to capture the possibility that workers and firms are directly influenced by previous price inflation when agreeing on wages. We use core inflation because it is more persistent than headline inflation and thus more likely to influence wages. Other work suggests that household inflation expectations may also capture the effects of lagged oil and other noncore inflation components (Coibion et al. 2018 and Glick et al. 2021). We also include the trend growth in labor productivity from the Bureau of Economic Analysis (BEA). Over time, higher labor productivity growth should boost wage growth, with the strength of the relationship depending on such factors as workers’ and firms’ bargaining power. To rule out the possibility that inflation leads to ever-rising, “explosive” increases in wage growth over time, we assume the total effects of lagged and expected inflation equal wage inflation over the long run (see, for instance, Hooper, Mishkin, and Sufi 2020).

To estimate this wage Phillips curve, we use quarterly data from the second quarter of 1980 to the first quarter of 2022. We measure wages using the wages and salaries component of the employment cost index compiled by the BEA, with data beginning in the first quarter of 1980. This measure accounts for changes in the composition of the workforce, which could impact wage growth separately from the wage Phillips curve. Inflation rates in wages and core prices are measured as (log) changes over each quarter at an annual rate.

Figure 3 reports the estimated coefficients for the wage Phillips curve components, where the height of the bars indicates the estimated percent change of wage inflation in response to a 1 percentage point change in each component. The figure also reports the 95% confidence bands around each estimate. The figure shows that wage inflation is significantly related to labor market tightness, as Figure 2 implies. A tighter labor market, represented by a negative unemployment gap, is associated with higher wage inflation. The results also confirm that greater productivity growth is accompanied by higher wages.

Figure 3
Effects on wage inflation of 1% change in variables 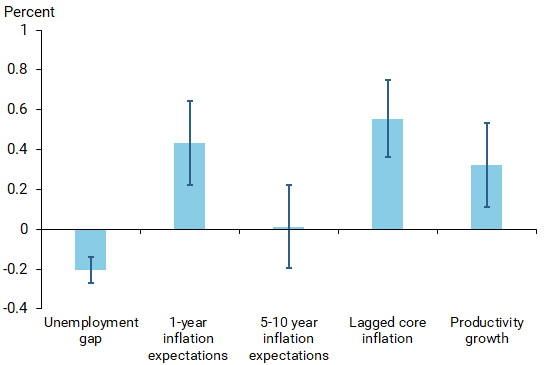 Our general results are unaffected if we use alternative measures of variables in our analysis, such as measuring wages with average hourly earnings or measuring slack with the vacancy-to-employment ratio, or if we add other possible explanatory variables such as oil or noncore price inflation. Removing the assumption that wage inflation is tied to past and expected inflation over the long run also does not affect our main conclusion, that wages are sensitive to short-run but not to long-run inflation expectations.

According to these results, the recent rise in household year-ahead inflation expectations could lead to substantially higher wage inflation in the short run. Focusing on this channel alone, our estimated wage Phillips curve suggests current household one-year-ahead expectations could add nearly 2.3 percentage points to wage inflation. To the extent that companies raise prices and pass on the higher labor cost to consumers, our results point to an important upside risk to inflation. To mitigate this cost increase, companies could decide to automate or offshore some jobs, although higher tariffs and supply-chain challenges make offshoring more costly than in the past.

On the other hand, the decline in unionization over the past 50 years and the disappearance of automatic cost-of-living adjustments in long-term wage contracts make it less likely that short-run inflation expectations will persistently boost wage inflation. Similarly, many firms have relied on one-time bonuses to attract and retain workers instead of permanently raising wages. More broadly, monetary policymakers have the tools to reduce this inflation risk by raising interest rates to lean on overall demand. The fact that changes in long-run inflation expectations have been muted over the past year suggests that households have confidence that the Federal Reserve will restrict monetary policy sufficiently to bring about low inflation over the medium run and avoid a price-wage inflationary spiral.

Sylvain Leduc is executive vice president of the Economic Research Department of the Federal Reserve Bank of San Francisco.

Mollie Pepper is a research associate in the Economic Research Department of the Federal Reserve Bank of San Francisco.

Hooper, Peter, Frederic Mishkin, and Amir Sufi. 2020. “Prospects for Inflation in a High Pressure Economy: Is the Phillips Curve Dead or Is It Just Hibernating?” Research in Economics 74(1), pp. 26–62.