Where should I look to find statistics on the share of subprime mortgages to total mortgages?

For information on subprime mortgages, as well as mortgages in general, look to data published by the Mortgage Bankers Association (MBA)—a trade association that sells market research and data on its web site. The MBA data are often used to estimate subprime loans’ share of total mortgages. You can also visit the Press Center section of the MBA Web site and look for the latest free National Delinquency Survey (NDS) results.

Subprime mortgages are residential real estate loans that are generally considered to be higher risk. These loans are not guaranteed by the Federal Housing Administration (FHA).  The MBA publishes quarterly data on loans outstanding and loan performance for subprime and other types of loans in its NDS. According to the MBA, the NDS is

“…based on a sample of more than 44 million mortgage loans serviced by mortgage companies, commercial banks, thrifts, credit unions and others, NDS provides quarterly delinquency and foreclosure statistics at the national, regional and state levels. Delinquency and foreclosure measures are broken out into loan type (prime, subprime, VA and FHA) and fixed and adjustable rate products. At each geographic classification, there are 7 measures: total delinquencies, delinquency by past due category (30-59 days, 60-89 days and 90 days and over), new foreclosures, foreclosure inventory and seriously delinquent. The total number of loans serviced each quarter, as compiled through the survey, is also included in the data.” 1 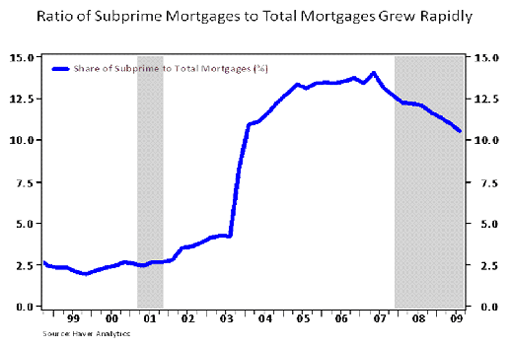 Also note that since mid-2007 originations of new subprime loans have all but dried up. You can view this at the FRBSF website, The Economy: Crisis & Response listed below. In late 2009 the main channel of mortgage credit for higher risk borrowers was through the FHA guarantee program. Information regarding FHA mortgages is available on the HUD web site.

For more on subprime mortgages and the mortgage markets see: