What are some of the commonly used statistics on housing prices and housing market conditions and where can I find them?

Good news: there is a wealth of readily available data that measures these things! Sources such as the Federal Housing Finance Agency (FHFA) and the US Census Bureau collect and disseminate some of these measures. Standard & Poor’s and the National Association of Realtors provide other important indices that measure house price changes. Here are some of the statistics, or indicators, that economists and analysts use to measure activity in the areas you described.

Chart 1:  Steep Climb in House Price Indices Is Followed by a Sharp Decline 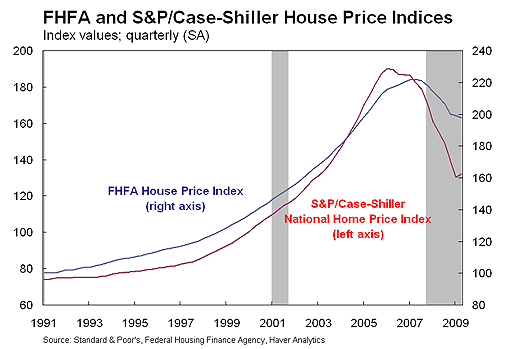 Let me give you a brief background on these indices. Both indices are estimated with the repeat sales methodology, which uses sales prices of properties that have sold more than once in order to provide a better measure of house price appreciation. It also makes adjustments to maintain the same house quality. Newly constructed homes, therefore, are excluded from this measure. Among the critical differences between the indices are 1:

As Chart 1 indicates, both indices of national house prices were rapidly increasing during the early part of this decade, before flattening in 2006 and eventually dropping sharply.

Other closely followed measures of house prices are published by the National Association of Realtors (NAR) and are shown in Chart 2. NAR provides two additional measures of actual house prices, rather than house price indices, such as those produced by S&P/Case-Shiller and FHFA. NAR’s website, notes that its series on Median Sales Price of Existing Homes provides “statistics on sales and prices of existing single-family homes for the nation and the four regions [Northeast, Midwest, South, and West]. Beginning on February 25, 2005, these figures include condos and co-ops, in addition to single-family homes. The association also produces state-by-state existing-home sales and metro area home prices on a quarterly basis.” NAR also prepares the national and regional Median Sales Price of Existing Single-Family Homes series, which provides the same statistics as those described above, except that they only include single-family homes. Predictably, these two national home price series are quite similar. Both of the NAR measures exclude homes that were built less than one year prior from their definition of “existing” homes. When interpreting movements in the median house price series, keep in mind that they can be driven by changes in the composition of housing sales (for examples, sales of more high-end homes would tend to drive the median up).

Chart 2:  Steep Increases in Median House Prices Is Followed by
a Dramatic Downturn 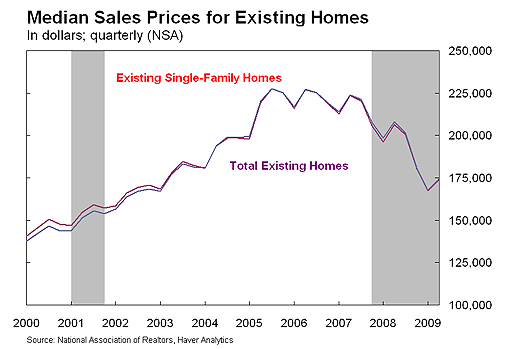 Like the two house price indices we looked at in Chart 1, the NAR measure of median home sales price shown in Chart 2 indicates a sharp increase in prices throughout the first half of this decade, followed by even sharper declines after 2006.

Another useful way to examine the house price index and median house price data that we’ve just seen is to calculate the percent changes in these values from one year prior. This is something that economists regularly do to examine how the series are changing over time. To do this, let’s use non-seasonally adjusted data on a quarterly-aggregated basis for our three measures of single-family home prices used in Charts 1 and 2: 2

Chart 3:  Rates of Change in House Prices and Indices Show Surge and Fall 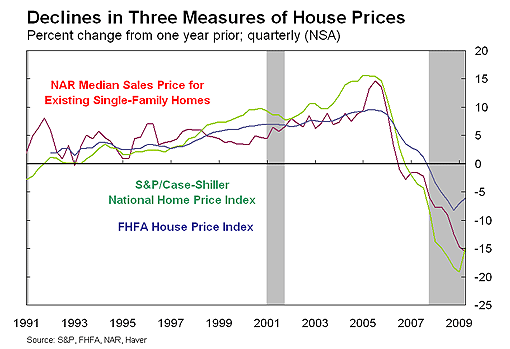 Here, all three measures of house prices show a pattern of consistent house price appreciation in the roughly five to fifteen percent range throughout the early part of this decade. This means that by these measures, house prices increased each year for a period of several years, until early 2006 when their growth declined and eventually fell into the negative territory (depreciation). At mid-year 2009, these measures show depreciation in the range of roughly six to fifteen percent from a year earlier.

The housing market slump is also clearly evident in the statistics on both new and existing house sales. These data are published by the US Census Bureau and the National Association of Realtors (NAR). New sales are reported monthly on the Census Bureau report: New Residential Sales. Existing home sales are reported monthly by the NAR on their website. 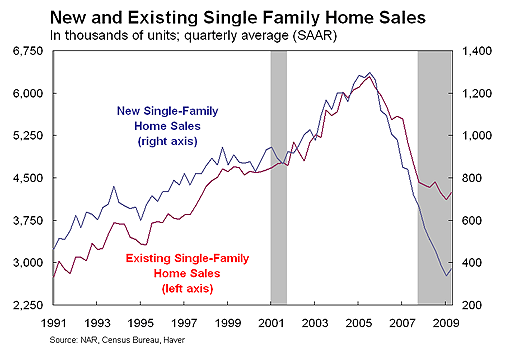 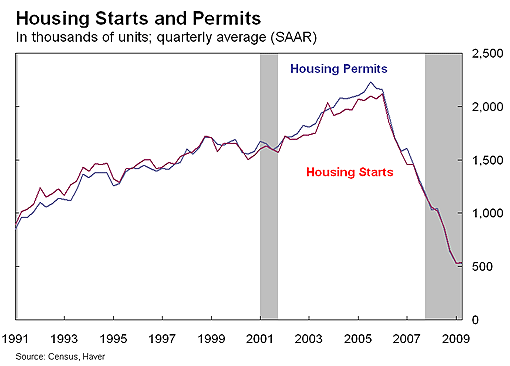 New residential housing activity witnessed a surge in growth from around the end of 2001 until 2006 when house prices began to fall, bringing new home construction to a halt. By April 2009, new permits and new starts had each fallen more than 78% from their peaks in, respectively, September 2005 and January 2006. Scaling back new building activity is an important economic adjustment during a housing slump when house prices are falling, home sales are depressed, and the inventory of new and existing houses for sale remains well above normal levels.

Still, the housing starts and permits figures are an indicator to watch for signs of a turnaround in new economic activity. Housing permits are designated as one of the leading economic indicators, because they tend to turn up in advance of the overall economy. So, keep an eye on these indicators as we go forward.

For more on the housing market see:

Dr. Econ, January 2006: How does the slowdown in the housing market affect the construction sector and other housing-dependent industries? – Part I

Dr. Econ, January 2007: How does the slowdown in the housing market affect the construction sector and other housing-dependent industries? – Part II

1. To read more about the differences between the two price indices, please refer to Leventis 2008