How have state governments fared during the recent recession?

State governments have faced a myriad of fiscal challenges during the recent recession. You may have heard in the news, or experienced first-hand, cuts in services and jobs in your state or community - or perhaps even tax increases. One recent study found that 48 states faced budget shortfalls in fiscal years 2009 and 2010, while 46 states continued to face budget shortfalls for the current fiscal year 2011.1,2

The budget shortfall (or “projected deficit”) is the difference between a state’s annual revenue expectations and and the cost of ongoing services and existing obligations for the year.  Whenever a budget shortfall occurs, the state budget needs to include an explanation of how this gap will be closed (because of the requirement to balance the budget, which I will cover later).  As Figure 1 illustrates, during the recent recession (which lasted from December 2007 to June 2009) and recovery, states have faced budget shortfalls that dwarf those of the previous recession period, and are anticipated to extend into at least 2012. Let’s explore this issue more deeply.3 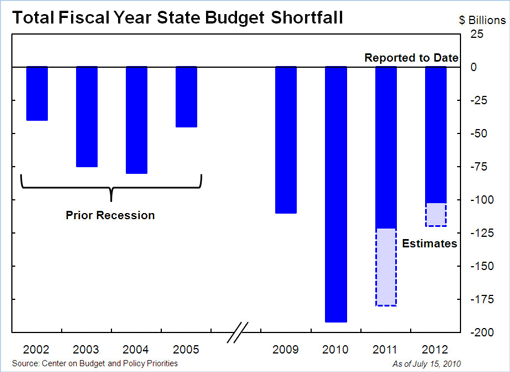 The role of state and local governments in the economy

State and local governments provide important services to the economy. In fiscal year 2008, state governments spent a combined $1 trillion on public services with more than half of these expenditures going to education (K-12 and universities) and health care (Medicaid and CHIP).6 But state governments also provide other important services, such as transportation and infrastructure, corrections, health and pensions for public employees, assistance to the poor and disabled, and aid to local governments, among many others. The spending cuts that have occurred in 46 states (plus Washington, D.C.) since 2008 have occurred widely across all major service areas: health care (31 states), aid to the elderly and disabled (29 states and D.C.), K-12 education (33 states and D.C.), and higher education (43 states), among others.7

State budgets and the macroeconomy

The longest and deepest recession since the Great Depression has caused the largest decline in state and local tax receipts since these data first became available in the 1940’s:

As Figure 2 shows, state and local tax receipts plummeted as GDP fell. By the second quarter of 2010, real tax receipts had fallen by an unprecedented 10 percent from the previous year. The previous record decline for that figure was less than 4 percent in 1976. The substantial majority of state revenue comes from personal and corporate income and sales taxes.8 As the economy went into recession, personal incomes fell, corporate sales declined and consumers stopped spending. All this depressed state tax receipts. 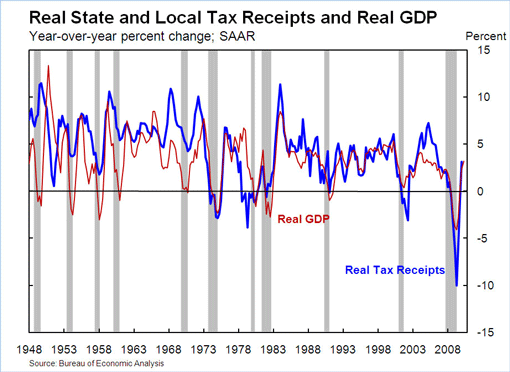 The (in)ability of state governments to respond

In the face of record revenue declines, states were unable to cut spending at a similar pace:

Figure 3 plots the real (inflation adjusted) tax receipts series from Figure 2 against real consumption expenditures of state and local governments that excludes debt on interest and mandatory social transfers  - because doing so provides the best measure of discretionary spending.9  As Figure 3 clearly demonstrates, state and local governments made a noticeable effort to reduce spending but that effort was not nearly enough to make up for the unprecedented drop in revenue. A recent study by economists at the Federal Reserve Bank of San Francisco points to the limited institutional ability of state governments to respond to economic shocks as a second major reason for fiscal troubles -beyond the economic shocks themselves. The study describes three major reasons for this.

First, state budgets have one particularly unique aspect to them that makes them different from the U.S. federal budget: nearly all states have a balanced budget requirement. This means that when a budget is being readied before the legislature, if revenue (tax receipts) is forecasted to be less than expenditures, the budget must then be amended to close that gap. This can be accomplished through a combination of spending cuts or tax increases. A state’s fiscal challenges can be further compounded when actual tax receipts during a given fiscal year fall below those projected in an enacted budget because then the state must account for the resulting budget deficit from the prior year during the current fiscal year. This especially problematic during recessions because budget gaps tend to build upon one another in successive years (again, see Figure 1). The federal government, on the other hand, can  plan to borrow funds to cover expected revenue shortfalls when approving the federal budget. This gives the federal government greater flexibility to increase spending for short-term economic purposes when revenue and demand are low – i.e. what is typically referred to as a short-term fiscal expansion. State governments do not have the option of such deficit spending.10

Second, states have limited abilities to reduce certain types of spending during a recession. One major reason for this is that demand for services provided by state governments, particularly social safety net programs like unemployment insurance, goes up during a recession. Another important reason, which is best described in the San Francisco Fed study, is that:

“…many state programs are tied to federal matching funds, which makes it very costly for states to reduce spending in these areas. For instance, states typically receive reimbursement from the federal government for between 50% and 80% of their Medicaid expenses. The federal stimulus package, the American Recovery and Reinvestment Act of 2009, increased each state’s matching percentage by 6.2 percentage points. This means that, if a state cuts Medicaid expenses by one dollar, it will net savings of only between 12 and 44 cents, while denying its residents a dollar’s worth of Medicaid services.”

Third, “rainy day” funds, which are monies that state governments keep on hand from prior budget surpluses to offset unexpected drops in revenue in future years, were mostly depleted coming into the recession. In addition to potentially being politically unpopular, states also face legal limitations on how much they may set aside in these funds. 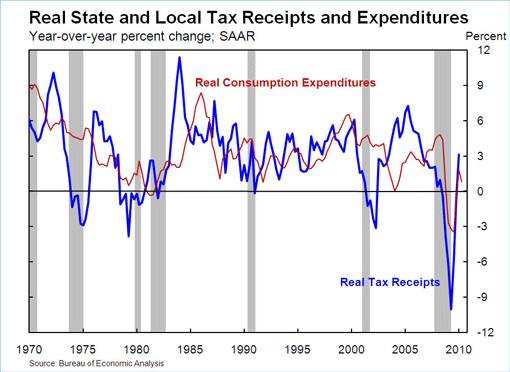 The outlook for state governments

By all accounts, the state fiscal crises are likely to get worse before they get better for two primary reasons.11 First, state budget recoveries tend to lag recoveries of national GDP growth. Since the economic recovery is expected to be modest and gradual12, it could be some time until state finances are again on solid ground. Secondly, federal financial assistance to states provided through the American Recovery and Reinvestment Act has dwindled for fiscal year 2011 and is set to be fully exhausted by 2012.13

All sectors in the U.S. economy have been battered by the worst recession since the Great Depression, and state governments are no exception. The economic downturn has depleted tax revenues at precisely the time when demand for state government services has gone up. The institutional arrangements of state governments have made it difficult for authorities to respond to the record decline in tax revenues, while the likelihood of a rapid turnaround looks bleak.

For more information on the financial crisis, the Fed’s monetary policy response, and the recovery, please see the Federal Reserve Bank of San Francisco website, The Economy: Crisis & Response.

For more reading on state budgets and the recent crises, see:

Boyd, Donald J. and Lucy Dadayan. 2010.  “Revenue Declines Less Severe, But States’ Fiscal Crisis Is Far From Over.” State Revenue Report (No. 79), The Nelson A. Rockefeller Institute of Government.

Center on Budget and Policy Priorities. 2010b. “Where Do Our State Tax Dollars Go?” Policy Basics, CBPP.

For more on statistical releases, see:

4. For information and data on GDP, see National Income and Product Accounts from the Bureau of Economic Analysis.

5. For information and date on payroll employment, see the Establishment Survey from the Bureau of Labor Statistics.

6. For more on state government spending, see Center on Budget and Policy Priorities (2010b).

10. For more on state budgets, see Center on Budget and Policy Priorities (2010a).