Dr. Econ: How severe was the contraction in bank lending that followed the 2008 financial crisis and recession?

The total decline in bank loans after their 2008:Q3 peak was the largest contraction in percentage terms during the post-World War II period. In this reply, we’ll compare bank lending trends during and after the two largest credit contractions over the past 100 years.

Total loans and leases outstanding at the end of the quarter for all U.S. commercial banks peaked in the third quarter of 2008 at $8.1 trillion, the quarter that concluded with the worst period of the 2008 financial crisis. 1 2 Over the next ten quarters, total loans and leases outstanding (adjusted for reporting changes) fell by a total of $1.3 trillion, a dramatic 16.2 percent drop from their peak.3 This decline in outstanding bank loans reported by the Federal Reserve (blue line) is shown in Figure 1, and dwarfs any other downturns in loans outstanding over the 50-plus-year period shown on the chart. On a positive note, however, the chart also shows that bank loans began to increase again, slightly, starting in 2011:Q2.

Another way to think about the severity of the contraction in loans is to look at nominal bank loan growth rates. This has the advantage of clearly showing the growth pattern over business cycle recessions and recoveries. The red bars in Figure 1 show the quarterly (based on end of quarter loans) year-over-year percent changes from 1960 through the 2012:Q2. Bank loan growth rates typically rise rapidly during the early stages of recoveries, then slow dramatically just before and during recessions.

Recessions, which are designated by the National Bureau of Economic Research (NBER), are shown as gray bars on the chart.4 In Figure 1, notice that lending growth rates generally lag the business cycle, meaning that loan growth rates typically hit lows near or after the end of a recession when the recovery has already started.

The measure of loan growth shown in Figure 1 indicates that year-over-year bank loan growth rates (red bar) has only turned negative three times over the past 8 recessions (a period of over fifty years). Clearly, the decline following the Great Recession of 2007-2009 was much more severe (falling at a 10 percent annual rate or more in two consecutive quarters and declining for 10 consecutive quarters) than in any other post-World War II recession.

Figure 1. Total Outstanding Bank Loans and Year-over-Year Growth Rates Both Show the Large Impact of the Financial Crisis and the Great Recession 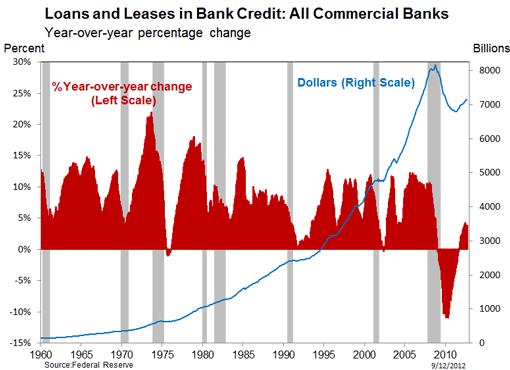 Both supply and demand factors likely play a role in the slowdowns and contractions in loans and leases that follow the onset of most recessions. In the deep and long lasting December 2007 to June 2009 recession that included the September 2008 financial crisis, bank lending contracted as banks tightened the supply of credit and faced an extended falloff in the demand for loans. Banks seeking to reduce their exposure to the recession and to avoid loan losses (that typically rise during recessions) increased credit risk premiums on loan interest rates, implemented more stringent non-interest rate lending standards,5 and increased fees in an effort to reduce risk and to boost earnings. Banks also took steps to increase both their capital (reducing leverage) and to build their reserves against loan losses.6 At the same time, the recession caused weaker business and household loan demand as firms and consumers cut spending, increased saving, and increased their holdings of liquid assets.

“How does the Federal Reserve define "loans and leases," and how do they relate to "commercial and industrial loans"?” Ask Dr. Econ, Federal Reserve Bank of San Francisco website, November 2004.

“How do you define "Commercial Loans" and what is the economic importance of these types of loans?” Ask Dr. Econ, Federal Reserve Bank of San Francisco website, September 2000.

H.8 Release, Assets and Liabilities of Commercial Banks in the United States. Federal Reserve Board.

Bank Data Guide. Federal Deposit Insurance Corporation (FDIC). This website provides users with the ability to download and review data from individual banks, from groups of banks, and for all banks.

1. Data are nominal loans for both periods.

2. Quarterly data series generated from monthly data, End of Period (EOP). Data are collected by the Federal Reserve and published in the H.8 Release, Assets and Liabilities of Commercial Banks in the United States. Data are available monthly starting in 1947. For the analysis here, end of quarter loan totals (generated from the quarterly bank Call and Income Reports collected by the banking regulatory agencies) are used to create the 1960-2012 data series shown in Figure 1.

5. Non-interest rate terms of bank lending may include such terms as credit standards for borrowers, collateral requirements, loan-to-value ratios that the bank may vary along with interest rates charged on the loan. For information on banking lending standards, please see the Federal Reserve Board’s Senior Loan Officer Opinion Survey on Bank Lending Practices.

6. The allowance for loan and lease losses, which was originally referred to as the “reserve for bad debts,” is a valuation reserve established and maintained by charges against the bank’s operating income. As a valuation reserve, it is an estimate of uncollectible amounts that is used to reduce the book value of loans and leases to the amount that is expected to be collected. For additional information, please see “Allowance for Loan and Lease Losses, Comptroller’s Handbook.” Office of the Comptroller of the Currency (1998), Page 1.