Is It Still Worth Going to College?

Earning a four-year college degree remains a worthwhile investment for the average student. Data from U.S. workers show that the benefits of college in terms of higher earnings far outweigh the costs of a degree, measured as tuition plus wages lost while attending school. The average college graduate paying annual tuition of about $20,000 can recoup the costs of schooling by age 40. After that, the difference between earnings continues such that the average college graduate earns over $800,000 more than the average high school graduate by retirement age.

Media accounts documenting the rising cost of a college education and relatively bleak job prospects for new college graduates have raised questions about whether a four-year college degree is still the right path for the average American. In this Economic Letter, we examine whether going to college remains a worthwhile investment. Using U.S. survey data, we compare annual labor earnings of college graduates with those of individuals with only a high school diploma. The data show college graduates outearn their high school counterparts as much as in past decades. Comparing the earnings benefits of college with the costs of attending a four-year program, we find that college is still worth it. This means that, for the average student, tuition costs for the majority of college education opportunities in the United States can be recouped by age 40, after which college graduates continue to earn a return on their investment in the form of higher lifetime wages.

A common way to track the value of going to college is to estimate a college earnings premium, which is the amount college graduates earn relative to high school graduates. We measure earnings for each year as the annual labor income for the prior year, adjusted for inflation using the consumer price index (CPI-U), reported in 2011 dollars. The earnings premium refers to the difference between average annual labor income for high school and college graduates. We use data on household heads and partners from the Panel Study of Income Dynamics (PSID). The PSID is a longitudinal study that follows individuals living in the United States over a long time span. The survey began in 1968 and now has more than 40 years of data including educational attainment and labor market income. To focus on the value of a college degree relative to less education, we exclude people with more than a four-year degree. 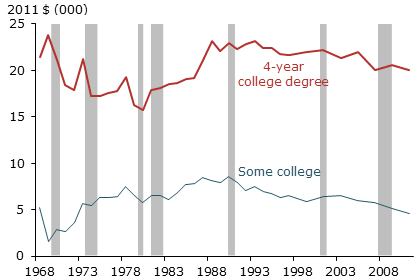 Figure 1 shows the earnings premium relative to high school graduates for individuals with a four-year college degree and for those with some college but no four-year degree. The payoff from a degree is apparent. Although the premium has fluctuated over time, at its lowest in 1980 it was about $15,750, meaning that individuals with a four-year college degree earned about 43% more on average than those with only a high school degree. In 2011, the latest data available in our sample, college graduates earned on average about $20,050 (61%) more per year than high school graduates. Over the entire sample period the college earnings premium has averaged about $20,300 (57%) per year. The premium is much smaller, although not zero, for workers with some college but no four-year degree.

A potential shortcoming of the results in Figure 1 is that they combine the earnings outcomes for all college graduates, regardless of when they earned a degree. This can be misleading if the value from a college education has varied across groups from different graduation decades, called “cohorts.” To examine whether the college earnings premium has changed from one generation to the next, we take advantage of the fact that the PSID follows people over a long period of time, which allows us to track college graduation dates and subsequent earnings. 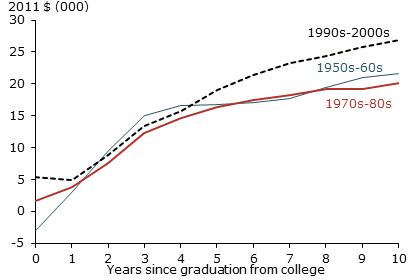 Source: PSID and authors’ calculations. Premium defined as difference in mean annual labor income of college graduates in each year since graduation and earnings of high school graduates in years since graduation plus four. Values are three-year centered moving averages of annual premiums.

Figure 2 shows that the college earnings premium has risen consistently across cohorts. Focusing on the most recent college graduates (1990s–2000s) there is little evidence that the value of a college degree has declined over time, and it has even risen somewhat for graduates five to ten years out of school.

The figure also shows that the gap in earnings between college and high school graduates rises over the course of a worker’s life. Comparing the earnings gap upon graduation with the earnings gap 10 years out of school illustrates this. For the 1990s–2000s cohort the initial gap was about $5,400, and in 10 years this gap had risen to about $26,800. Other analysis confirms that college graduates start with higher annual earnings, indicated by an initial earnings gap, and experience more rapid growth in earnings than members of their age cohort with only a high school degree. This evidence tells us that the value of a college education rises over a worker’s life.

Of course, some of the variation in earnings between those with and without a college degree could reflect other differences. Still, these simple estimates are consistent with a large and rigorous literature documenting the substantial premium earned by college graduates (Barrow and Rouse 2005, Card 2001, Goldin and Katz 2008, and Cunha, Karahan, and Soares 2011). The main message from these and similar calculations is that on average the value of college is high and not declining over time.

Finally, it is worth noting that the benefits of college over high school also depend on employment, where college graduates also have an advantage. High school graduates consistently face unemployment rates about twice as high as those for college graduates, according to Bureau of Labor Statistics data. When the labor market takes a turn for the worse, as during recessions, workers with lower levels of education are especially hard-hit (Hoynes, Miller, and Schaller 2012). Thus, in good times and in bad, those with only a high school education face a lower probability of employment, on top of lower average earnings once employed.

The cost of college

Although the value of college is apparent, deciding whether it is worthwhile means weighing the value against the costs of attending. Indeed, much of the debate about the value of college stems not from the lack of demonstrated benefit but from the overwhelming cost. A simple way to measure the costs against the benefits is to find the breakeven amount of annual tuition that would make the average student indifferent between going to college versus going directly to the workforce after high school.

To simplify the analysis, we assume that college lasts four years, students enter college directly from high school, annual tuition is the same all four years, and attendees have no earnings while in school. To focus on more recent experiences yet still have enough data to measure earnings since graduation, we use the last two decades of graduates (1990s and 2000s) and again smooth our estimates by using three-year centered moving averages.

We calculate the cost of college as four years of tuition plus the earnings missed from choosing not to enter the workforce. To estimate what students would have received had they worked, we use the average annual earnings of a high school graduate zero, one, two, and three years since graduation.

To determine the benefit of going to college, we use the difference between the average annual earnings of a college graduate with zero, one, two, three, and so on, years of experience and the average annual earnings of a high school graduate with four, five, six, seven, and so on years of experience. Because the costs of college are paid today but the benefits accrue over many future years when a dollar earned will be worth less, we discount future earnings by 6.67%, which is the average rate on an AAA bond from 1990 to 2011.

With these pieces in place, we can calculate the breakeven amount of tuition for the average college graduate for any number of years; allowing more time to regain the costs will increase our calculated tuition ceiling. A tuition calculator (Excel document, 14 kb) that allows users to plug in their own numbers for different scenarios is available to download.

If we assume that accumulated earnings between college graduates and nongraduates will equalize 20 years after graduating from high school (at age 38), the resulting estimate for breakeven annual tuition would be about $21,200. This amount may seem low compared to the astronomical costs for a year at some prestigious institutions; however, about 90% of students at public four-year colleges and about 20% of students at private nonprofit four-year colleges faced lower annual inflation-adjusted published tuition and fees in 2013–14 (College Board 2013). Although some colleges cost more, there is no definitive evidence that they produce far superior results for all students (Dale and Krueger 2011). 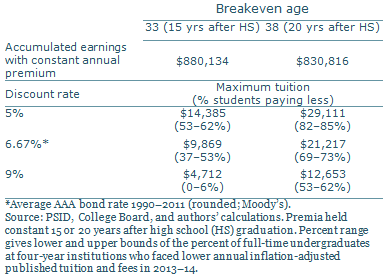 Table 1 shows more examples of maximum tuitions and the corresponding percent of students who pay less for different combinations of breakeven years and discount rates. Note that the tuition estimates are those that make the costs and benefits of college equal. So, tuition amounts lower than our estimates make going to college strictly better in terms of earnings than not going to college.

Although other individual factors might affect the net value of a college education, earning a degree clearly remains a good investment for most young people. Moreover, once that investment is paid off, the extra income from the college earnings premium continues as a net gain to workers with a college degree. If we conservatively assume that the annual premium stays around $28,650, which is the premium 20 years after high school graduation for graduates in the 1990s–2000s, and accrues until the Social Security normal retirement age of 67, the college graduate would have made about $830,800 more than the high school graduate. These extra earnings can be spent, saved, or reinvested to pay for the college tuition of the graduate’s children.

Although there are stories of people who skipped college and achieved financial success, for most Americans the path to higher future earnings involves a four-year college degree. We show that the value of a college degree remains high, and the average college graduate can recover the costs of attending in less than 20 years. Once the investment is paid for, it continues to pay dividends through the rest of the worker’s life, leaving college graduates with substantially higher lifetime earnings than their peers with a high school degree. These findings suggest that redoubling the efforts to make college more accessible would be time and money well spent.

Leila Bengali is a research associate in the Economic Research Department of the Federal Reserve Bank of San Francisco.

Goldin, Claudia, and Lawrence F. Katz. 2008. The Race between Education and Technology. Cambridge and London: The Belknap Press of Harvard University Press.