The record percentage of workers who are quitting their jobs, known as the “Great Resignation,” is not a shift in worker attitudes in the wake of the pandemic. Evidence on which workers are quitting suggests that it reflects the strong rebound of the demand for younger and less-educated workers. Historical data on quits in manufacturing suggest that the current wave is not unusual. Waves of job quits have occurred during all fast recoveries in the postwar period.

The labor market recovery since the depth of the COVID-19 pandemic in the spring of 2020 has been the fastest in postwar history. This historic rebound is evidenced by the steepest decline of the unemployment rate and the fastest growth in payroll employment on record (Hall and Kudlyak 2021).

At the same time, the share of workers quitting their jobs—either to take new jobs or to exit the labor force—has also hit its highest level since 2000, when the data began being collected. This recent spike in quits has been referred to as the “Great Resignation.” Some have interpreted it as a wave of resignations, driven by people reconsidering their career prospects and work-life balance, that is drastically altering the labor supply. In this Economic Letter, I provide two pieces of evidence that cast doubt on this narrative and, instead, suggest that the high rate of quits is simply a reflection of the rapid pace of overall labor market recovery.

First, I find that the increase in the quits rate is driven by young and less-educated workers in industries and occupations that were most adversely affected by the pandemic. This is also where payroll employment growth has been high recently, offsetting the job losses incurred in 2020.

Secondly, the Great Resignation is not so great after all. Historical data on the quits rate in manufacturing point to waves of quitting being common during fast recoveries when employment growth was high. Thus, it is not an anomaly, but instead fits the pattern of many past rapid recoveries.

The quits rate and the Great Resignation

In the past few months, a record share of workers in the nonfarm sector quit their jobs each month. A quit is an employee who leaves their job voluntarily, either to go to another job, search for another job while unemployed, or drop out of the labor market. This share, known as the quits rate, reached 3.0% in November and December 2021—its highest level since it was first reported in December 2000 as part of the Bureau of Labor Statistics’ (BLS) Job Openings and Labor Turnover Survey (JOLTS) release.

The record level of the “Total” quits rate in Figure 1 is often pointed to as signaling a Great Resignation. This supposedly reflects a wave of people reconsidering their career prospects, opportunities for hybrid and remote work, and work-life balance—and ultimately resigning in such numbers that it is drastically altering the labor supply in the wake of the pandemic. 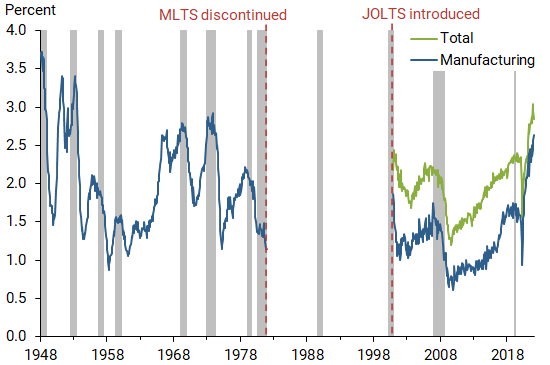 Because quits data for the total nonfarm sector are not available before 2000, I use the Manufacturing Labor Turnover Survey (MLTS); it measures quits and other labor turnover series similarly to JOLTS, for the manufacturing sector only. Although it was discontinued in 1981, combining it with the JOLTS quits data can provide a longer, though interrupted, historical perspective, shown as “Manufacturing” in Figure 1.

The earlier manufacturing data reveal several waves of quits that rival the current wave. Though the 2.3% rate in December 2021 is a record-high since 2000, the manufacturing sector hit comparable highs between 1948 and 1973.

Quits and rebound in demand for young and less-educated workers

One limitation of the JOLTS data is that they do not reveal what type of workers are quitting or whether they quit for career-changing reasons, such as switching industries or occupations, versus exiting the labor force. However, one can supplement the JOLTS information with evidence from the Current Population Survey (CPS; see Flood et al. 2021).

It is not possible to construct the direct equivalent of the JOLTS quits rate in the CPS because of conceptual, sampling, and scope differences between the two. With that in mind, I construct a proxy by measuring a quit in the CPS as someone who is payroll employed one month and, the next month, either reports to have switched job-to-job within payroll employment, switched to another type of employment, become unemployed and reports to have quit, or dropped out of the labor force and reports to have done so because of unsatisfactory working conditions.

The CPS data reveal four important facts. First, the industries with the biggest increase in their quits rate during the pandemic also saw the fastest job growth in 2021. Among these sectors are retail trade; arts, entertainment, and recreation; and accommodation and food services. These are also the sectors hit hardest by the pandemic. More generally, the correlation across industries between the change in the quits rate between November 2019 and November 2021 and payroll employment growth in the 12 months preceding November 2021 is positive in both the CPS (0.46) and JOLTS (0.49) data.

Second, a similar pattern holds across occupations. For example, the occupation with the highest increase in its quits rate is food preparation and service, which saw rapid employment growth over 2021. The cross-occupation correlation in the CPS between the quits rate change over the pandemic and 2021 employment growth is 0.38. Workers in these most-affected occupations tend to have less education.

Third, there was not a particularly large increase in the share of job quitters that changed either industry of employment or occupation. Such an increase would be expected if the current wave involved a broad reconsideration of career choices. The absence of such an increase is consistent, however, with the observation by David (2021) that there has not been a large net reallocation of payroll jobs across industries after the onset of the COVID recession.

The fourth fact is that the increase in the quits rate is largely due to younger and less-educated workers, as seen in Figures 2 and 3.

Figure 2 shows that the increase in the quits rate is particularly pronounced for younger workers, including millennials (ages 25 to 34) in the current wave. That is reflective of a normal cyclical pattern in which the quits rate of younger workers responds more to business cycle conditions and drives a large part of the movements in the overall quits rate. 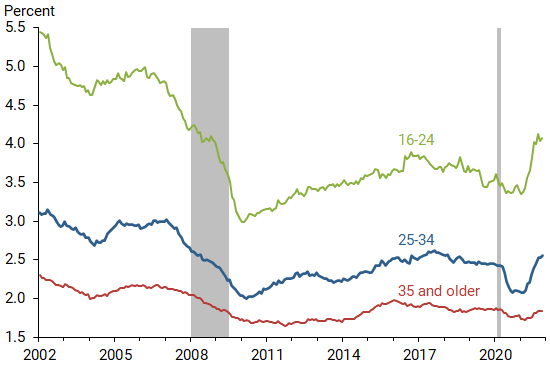 Figure 3 reveals that the increase in the quits rate is concentrated among less-educated workers, confirming the industry and occupation evidence. This is inconsistent with quits being driven by people who pursue other remote work opportunities: according to the CPS data, such changes are largely among more highly educated individuals. 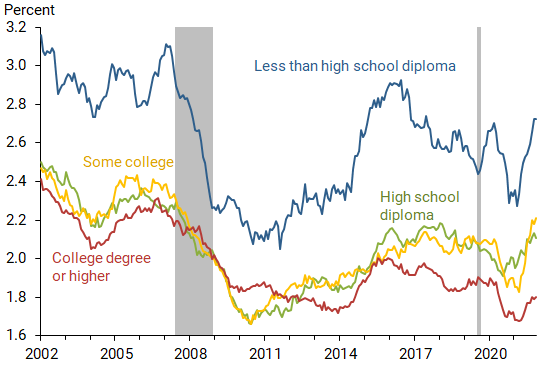 Thus, the evidence from the CPS suggests that the increase in the quits rate is being driven by young and less-educated workers in industries and occupations that were most adversely affected by the pandemic and where payroll employment growth is high to offset the job losses incurred in 2020.

The relationship between high payroll growth and elevated quits rates is not only true across industries and occupations—it is also true over time. Figure 4 shows this, comparing the quits rate in the manufacturing sector with payroll job growth in the overall economy and in manufacturing. 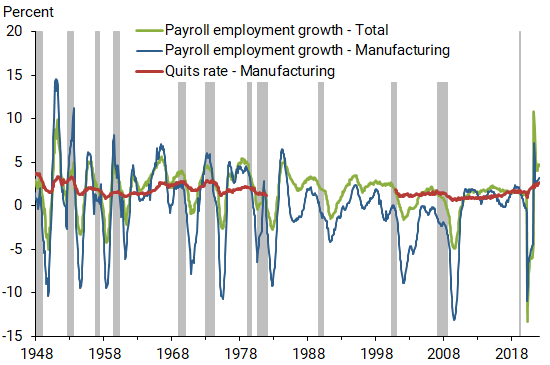 The figure shows that the quits waves in manufacturing in 1948, 1951, 1953, 1966, 1969, and 1973 are of the same order of magnitude as the current wave. All of these waves coincide with periods when payroll employment grew very fast, both in the manufacturing sector and the total nonfarm sector.

Thus, when the data are extended back prior to the JOLTS time frame beginning in 2000, the Great Resignation does not appear unusual. The current level of the quits rate is at a record high since 2000 because the recoveries of the 2001 and 2008 recessions were very slow by historical standards and thus did not put the same upward pressure on the quits rate as during other recoveries.

Wages and the “Great Renegotiation”

The link between employment growth and the quits rate that I document across sectors and occupations and over time is consistent with the model commonly used to assess the U.S. labor market conditions for low-skilled workers (Burdett and Mortensen 1998). That model explains how the quits rate is related to the frequency of job offers from other employers.

After a temporary spike in layoffs, like the one during the pandemic, employers post many vacancies to restaff and satisfy the rebound in demand for their goods and services. This explains the highly elevated job openings rate that has coincided with the record quits rate.

These vacancies do not only attract applicants who are unemployed. They also draw workers from other employers. Workers who receive a better offer will either quit their current job for another higher-paying job or renegotiate their wage, benefits, and work arrangements with their current employer. So, the “Great Resignation” is actually better interpreted as a “Great Renegotiation.”

As Manning (2006) points out, this can be interpreted as a temporary reduction in the bargaining power of employers that puts upward pressures on wages. His interpretation is consistent with recent wage pressures being highest in the retail and the leisure and hospitality sectors, which have also seen the highest employment growth and increases in job openings and quits rates.

These upward pressures on wages wane as the fast employment recovery slows down, the job openings rate tapers off, and the fraction of workers being poached by competitors declines.

It might take until late 2022 before this happens, however. Respondents to the November 2021 Survey of Professional Forecasters (Federal Reserve Bank of Philadelphia 2021) generally expect nonfarm payroll growth to remain high in 2022. If these forecasts are correct, the job openings and quits rates are likely to remain elevated and wage growth is likely to remain strong for the rest of the year.

Evidence from both recent worker surveys and historical data on quits shows that the “Great Resignation” is not as unusual as one might think. Waves of quits have been common during fast recoveries in the postwar period. In line with this historical evidence, the recent wave reflects the rapid rebound in labor demand for young and less-educated workers, largely driven by the retail, leisure and hospitality, and accommodation and food services sectors.

This analysis covers data through February 1, 2022.

Bart Hobijn is Professor of Economics at the W.P. Carey School of Business, Arizona State University, and Visiting Fellow in the Economic Research Department at the Federal Reserve Bank of San Francisco.