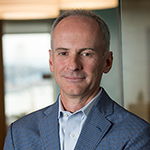 Sylvain Leduc is executive vice president and director of Economic Research at the Federal Reserve Bank of San Francisco. In this role, Sylvain helps oversee the development of key research and analyses to inform the monetary policy decision-making process. Prior to this appointment, Sylvain was senior vice president and associate director of Economic Research.

From May 2016 until July 2018, Sylvain served as Deputy Governor of the Bank of Canada. As a member of its Governing Council, he shared responsibility for decisions on monetary policy and financial system stability and for setting its strategic direction.

Born in Montréal, Canada, Sylvain received his bachelor’s and master’s degrees in economics from McGill University and obtained a doctor of philosophy in economics from the University of Rochester. He has served as Editorial Advisor for the Canadian Journal of Economics.